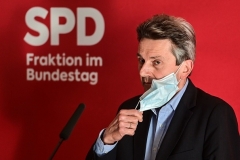 Berlin (CNSNews.com) – Liberal lawmakers in Germany are voicing dismay over the tightness of the U.S. presidential race, with some calling for a further decoupling from the United States regardless of who ultimately wins.

Some here view the close tally between Trump and his Democratic challenger Joe Biden as signaling not just an increasingly divided U.S., but a deepening gulf between the U.S. and European Union.

Rolf Muetzenich, parliamentary group leader for the left-leaning Social Democrats (SPD), said the closeness of the presidential contest emphasized the need for Europe to forge ahead with its own strong foreign and security policy.

“There are voices in Europe, to be taken seriously, that we need to dissociate ourselves further, including from what is happening in the United States,” he told the ARD broadcaster. “And I’m one of those voices.”

Should Trump win, Muetzenich said, the risk that the U.S. might withdraw from NATO has to be seriously considered.

“Europe must emancipate and move closer together,” he declared.

However, even if Biden wins, he did not envisage much improvement in the situation.

“With Joe Biden it will maybe be a little easier, but the demands of the U.S. will become clear and I think we have to adjust to that and show the limits.”

Liberal Democrats (FDP) leader Christian Lindner told the German television channel RTL that any prospect of a Biden landslide could now be discounted.

“We have all given ourselves very strongly to the principle of hope that everything will be fine and the Americans will correct a mistake,” he said, referring to the election of Trump four years ago.

Lindner said the FDP now hopes for “reasonably clear results, so that a prolonged period of instability does not begin in the United States.”

Sigmar Gabriel, a former foreign minister and SPD leader, fretted that an unclear election result could leave the U.S. without clear leadership, which he said would “please those who want to fill the vacuum” – China, Russia, and Turkey.

Transatlantic ties are particularly important for Germany, whose decades-old defense alliance has been strained amid Trump’s repeated criticism of Germany’s defense spending – which remains below an agreed NATO target.

Trump’s decision in June to reduce U.S. troop numbers in the country from 36,0000 to 24,000 – a move he linked directly to the defense spending dispute – also prompted security concerns here.

“However the election turns out, only the U.S. and Europe together can keep the West strong in view of Russia’s obvious exercise of power and China’s ambitions of global domination," she told the RND media service.

On Wednesday, taking into account the tightness of the race, she backpedaled slightly, saying Germany would likely need to spend more on its own defense in future, whoever wins.

Kramp-Karrenbauer expressed concern that Trump’s early claim of victory could lead to a “constitutional crisis,” a cause for “great concern.”

The federal government refrained from commenting formally on the election or Trump’s comments. Spokesman Steffen Seibert said only that the government was following developments “carefully.”

Meanwhile Slovenian Prime Minister Janez Janša was quick to voice support for a Trump victory, criticizing what he called  “delays and fact denying” from the media.

Other E.U. member-states and the E.U. leadership itself are apparently opting to wait for a result before reacting formally.

France merely acknowledged that the counting procedure was ongoing. “France will obviously work with the American president who is elected from this,” government spokesman Gabriel Attal said during a cabinet meeting.

“We will abide by whatever announcement is forthcoming officially by the relevant U.S. authorities, and we think that everybody should do likewise,” he said.

In reference to the Slovenian prime minister’s remarks, Mamer added that any divergent comments “are the responsibility of each person concerned.”