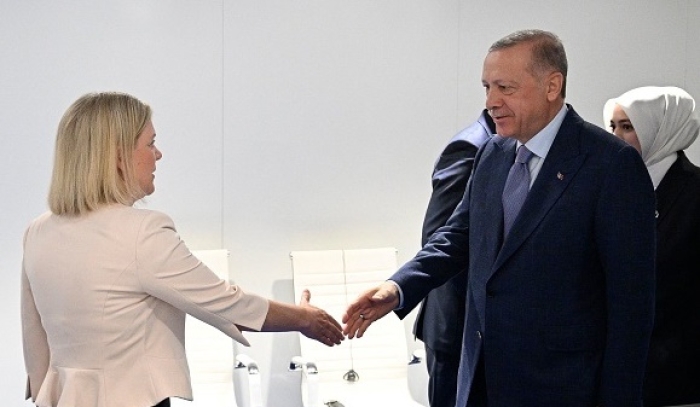 Berlin (CNSNews.com) – Turkey will move quickly to seek the extradition of “terror suspects” from Finland and Sweden, its justice minister said Wednesday, a day after Ankara agreed to drop its objection to the two Nordic countries’ applications to join NATO.

NATO leaders meeting in Madrid issued a formal invitation to Finland and Sweden to become members, after Russia’s invasion of Ukraine prompted the two to end decades of military non-alignment and seek accession.

NATO operates on a basis of consensus, and the Turkish government used its leverage to demand concessions from Finland and Sweden, mostly centered on Kurdish groups that Turkey regards as terrorists.

He said Turkey expects Sweden to hand over 11 members of the Kurdistan Workers Party (PKK) and ten from the movement led by the exiled Turkish cleric Fethullah Gulen.

After threatening to veto Finland and Sweden’s applications to join NATO, Turkey on Tuesday signed an agreement with them in Madrid. Stockholm and Helsinki agreed not to support terrorist organizations or “affiliated and inspired” groups, and to “address” pending extradition requests of “terror suspects.”

They also agreed to lift an arms embargo against Turkey, imposed in 2019 in response to a Turkish military offensive against Kurds in northern Syria.

Despite Bozdag’s claims, however, Swedish Prime Minister Magdalena Andersson said her country would never extradite Swedish citizens to Turkey, and that this had been “clearly” communicated in the talks ahead of the signing.

“There are some in Sweden who feel a certain concern and then we want to be clear with three things: The first is that we never extradite anyone who is a Swedish citizen, the second is that we will just as before follow Swedish and international law. The third is that if you do not engage in terrorist activities, you do not have to worry,” she said.

Finland has not responded publicly so far.

It was not immediately known whether the suspects referred to by Bozdag hold Swedish or Finnish citizenship.

The agreement signed in Madrid explicitly named the PKK and its Syria-based affiliate, the PYD/YPG, as well as Gulen’s social and educational movement, which Turkey has dubbed FETO (“Fethullah Gulen Terrorist Organization”).

The PKK has waged a separatist struggle with the Turkish state for three decades, and the U.S. and European Union have designated it a terrorist group.

But – to Turkey’s anger – they don’t recognize the PYD/YPG as a terrorist group, instead viewing it as an effective ally in the fight against ISIS in Syria.

Gulen’s movement, too, is not designated by either the U.S. or E.U. as a terrorist group.

Ankara accuses the 81-year-old U.S.-based cleric of responsibility for a failed coup attempt in 2016. Turkey’s attempts over many years to have the U.S. extradite him have been unsuccessful. Gulen denies the claims.

The agreement signed with the Turks by the Finnish and Swedish representatives sparked some criticism back home.

In Sweden, which is home to a 100,000-strong Kurdish diaspora, Amineh Kakabaveh, an independent lawmaker of Iranian Kurdish descent, called the move a “black day” for Sweden.

She told the TV4 Nyheterna station that the government was sacrificing the Kurds in order to win support for its NATO bid and had “bowed down to a tyrant” – a reference to Turkey’s autocratic President Recep Tayyip Erdogan.

In Finland, Green politician Märta Stenevi accused the government of “bowing down to an authoritarian regime.”

NATO said in a statement on Wednesday that it was now formally inviting Finland and Sweden to join, saying their accession “will make them safer, NATO stronger, and the Euro-Atlantic area more secure.”

Joining NATO marks a significant shift for both countries.

Sweden would end more than 200 years of non-alignment, while Finland, which shares an 810 mile border with Russia, would end a policy of neutrality adopted as a Soviet-imposed condition of peace following World War Two.

The process to finalize now requires ratification by all 30 current allies. That could take months, but the alliance stressed that “the security of Finland and Sweden is of direct importance to the Alliance, including during the accession process.”

NATO secretary-general Jens Stoltenberg said Tuesday Russian President Vladimir Putin had been pushing against any further enlargement of the alliance.

“He wanted less NATO,” he said. “Now President Putin is getting more NATO on his borders.”

Biden met with Erdogan on the sidelines of the NATO summit. Senior administration officials briefing reporters on background said the U.S. had not offered Turkey anything in order to get Erdogan to drop his opposition to the two countries’ applications to join.