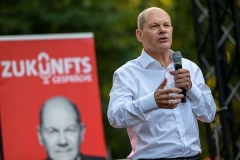 The latest polls place Olaf Scholz of the center-left SPD in leading position to be Germany’s next chancellor. (Photo by Jens Schlueter/ Pool /AFP via Getty Images)

Berlin (CNSNews.com) – A three-party coalition is looking possible for the post-Merkel era in Germany, after the center-left Social Democrats unexpectedly took the lead in polls 19 days ahead of the federal election.

With Merkel stepping down after 16 years as chancellor, the September 26 election could also mark the first loss for her Christian Democrats (CDU) party since she took office, if polling proves accurate.

The most recent polls, by INSA, Infratest Dimap, and Forschunggruppe Wahlen, put the SPD in the lead with 25-26 percent, while the CDU dropped to new lows of 20-20.5 percent.

The Greens polled next at 15.5-17 percent, followed by the liberal Free Democratic Party (FDP) with 11-12.5 percent. Next up are the far right Alternative für Deutschland at about 11.5 percent, with the left-wing Linke at around 6.5 percent.

The poll numbers come as a surprise, as the CDU held a consistent lead in polls over the entire 2017-2021 term, interrupted briefly in April when the Greens took the lead before dropping back again.

Also, the SPD – a junior partner in the CDU-led coalition since 2013 – has struggled over recent years.

The last federal election, in 2017 gave the CDU 32.9 percent of the vote compared to 20.5 percent for the SPD. Coalition negotiations then dragged on for six months.

The shift elevates to the lead the SPD’s candidate candidate for chancellor, Olaf Scholz, who currently serves as finance minister and vice-chancellor in the Merkel-led coalition.

The other two leading chancellor aspirants are the CDU’s Armin Laschet and Greens candidate Annalena Baerbock.

Scholz told Tagesspiegel at the weekend that he would like to govern in coalition with the Greens. But according to the current poll figures, the SPD would need both the Greens and support of either the CDU or FDP to form a ruling majority.

(The major parties have explicitly ruled out a coalition with the far-right, anti-immigration AfD.)

On Monday, Linke party leader Dietmar Bartsch pitched his far-left party as a prospective partner in an SPD-Greens coalition, claiming it offered them the best chance of delivering on left-leaning campaign pledges such as raising minimum wage and promoting renewable energy.

But Scholz had said in the earlier interview that the SPD would not work with any party that did not clearly commit to NATO.  Linke seeks to abolish the alliance.

By contrast the four parties leading in the polls – CDU, SPD, Greens and FDP – all support a renewed and strengthened transatlantic partnership. Describing it as an indispensable pillar of German foreign policy and European security.

At the same time, they have called for the E.U. to become more independent in security and defense policy through expanded European cooperation – a call that has resonated anew since the chaotic U.S. troop withdrawal from Afghanistan.

Within that broader area of agreement, however, are variations on key foreign policies such as how to deal with China and Russia – differences that could complicate coalition negotiations among them after the election.

The Greens, FDP, and some elements within both the SPD and CDU are deeply concerned about dealings with Moscow, given its annexation of Crimea, the poisoning and imprisonment of dissident Alexei Navalny, and its support for the regime in Belarus.

The Greens want Berlin to take a tougher position on Russia, including an end to the controversial Nord Stream 2 natural gas pipeline between Russia and Germany.

The FDP, which describes itself as “staunch transatlanticists” committed to German-American friendship, is also critical of the Nord Stream 2 pipeline, which Russia said Monday is due to go operational soon, and has called for a restoration of “the badly damaged political confidence in Germany’s reliability” as an ally.

Despite criticism from some of her own party colleagues, Merkel has repeatedly rejected concerns that Russia could use the pipeline as a political weapon, defending it as a purely economic project.

Both Laschet and Scholz, chancellor candidates for CDU and SPD respectively, suggested at an event in June that the pipeline could be stopped in an “emergency,” if Russia were to attempt to use it for political leverage.

But in interviews with the SWR broadcaster last week, both Laschet and Scholz replied “no” when asked if the pipeline would be stopped.

Positions on China could be another source of contention within any potential coalition.

The CDU and SPD have avoided provocative statements on the relationship with China, whereas the Greens and FDP are openly critical of Beijing.

Laschet said in June he supports Germany’s current China policy, which should not be reversed despite human rights concerns such as the treatment of Uyghurs or the clampdown on democracy in Hong Kong.

Noah Barkin, a senior visiting fellow at the German Marshall Fund, has described Scholz as “a soft-spoken pragmatist, who has shown an aversion to open confrontation in domestic politics and in Germany’s relations with other countries.”

“It is difficult to imagine him steering Berlin in a tougher rhetorical direction with China if he becomes chancellor,” Barkin wrote in an analysis.

The Greens’ platform calls for Europe to work together with U.S. on establishing “a global democratic alternative to the authoritarian hegemonic strivings of China.”