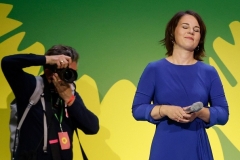 Berlin (CNSNews.com) – Germany’s Greens party has issued an eleventh hour challenge to the controversial Nord Stream 2 natural gas pipeline between Russia and Germany, in a call that could cause new difficulties in critical talks on forming a coalition government.

“Current high gas prices are primarily the result of high demand and low supply,” she said in an interview with a German newspaper group. “A Russian poker game can be observed: gas deliveries were considerably reduced.”

Baerbock said this was likely a deliberate move by the Russians designed to “force the rapid commissioning of Nord Stream 2.”

“We mustn’t allow ourselves to be blackmailed,” she said.

Baerbock’s comments drew criticism from the Russian Ambassador in Berlin, Sergey Nechayev, who said that “sanctions, ultimatums and various threats are an obstacle” to future relations and cooperation.

Russia is Europe’s largest gas supplier, accounting for around 43 percent of imports last year, according to Eurostat data.

Earlier this week there were signals that additional Russian gas supplies – which would alleviate the current energy shortage amid soaring gas bills – would only come once Nord Stream 2 was approved.

Russian President Vladimir Putin told a conference on Thursday that if German regulators give the green light for Nord Stream 2 to begin operating, Russia could quickly increase the supply of gas to Europe.

“If the German regulator gives approval tomorrow, supplies of 17.5 billion cubic meters of gas will start the day after tomorrow,” Putin told the Valdai International Club.

In the interview, Baerbock called for German regulators to hold back on granting a license for the pipeline to begin operation, on the grounds that its operating company, the Swiss-based Nord Stream 2 AG, is not an independent operator.

An E.U. regulation that aims to ensure fair competition in the market, known as the “Gas Directive,” forbids a single company from carrying out both the production and the transportation of gas.

Gazprom in Russia both supplies the gas and at the same time owns 100 percent of Nord Stream 2 AG.

Baerbock’s remarks came a day ahead of what are expected to be difficult post-election coalition talks between the Greens, the center-left Social Democrats (SDP), and the economically liberal Free Democrats.

The Greens and Free Democrats have both voiced opposition to Nord Stream 2.

However the SDP – which as the largest party would lead an envisaged coalition government – has taken a less clear-cut stance, and kept relatively quiet about the pipeline during the election campaign.

In June, the party’s chancellor-candidate, Olaf Scholz, did acknowledge that the pipeline could conceivably be shut down should Russia attempt to leverage it to apply pressure on its political rival, Ukraine, by shutting off gas supplies there.

But some high-profile SDP figures are supportive of the pipeline.

The SDP’s Manuela Schwesig, who is Minister President of the state of Mecklenburg-Western Pomerania, responded to Baerbock’s remarks by saying her state was “behind the project.”

“A large country like Germany needs a secure energy supply and a reliable energy policy at all times,” Schwesig told a press conference.

“In the next few years, Germany will phase out nuclear energy and energy from coal-fired power generation,” she said. “In addition to the expansion of renewable energies, we will need gas as an additional energy source, at least for a transitional period.”

Katja Yafimava, a senior research fellow at the Oxford Institute for Energy Studies, said in a quarterly gas report that a provisional, limited-term approval of Nord Stream 2 by the German regulators was realistic, due to the high demand.

“From the gas supply perspective, the winter 2021/22 looks anything but normal, and it is conceivable that [the regulator] could indicate to the NS2 operator that it could start flowing gas before its certification process is completed and continue to do so on a time-limited basis to alleviate a supply shortage in Europe,” she wrote.