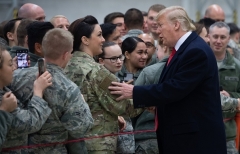 Berlin (CNSNews.com) – Germany on Wednesday confirmed that the United States is considering a partial removal of troops from German soil, prompting speculation that they could be moved to Poland.

“The federal government has been informed that the U.S. administration is considering reducing the presence of U.S. armed forces in Germany,” Chancellor Angela Merkel’s spokeswoman Ulrike Demmer told reporters in Berlin.

She provided no further details, but said the government has not been made aware of any final decision yet.

Speculation about the move mounted after the Wall Street Journal, citing U.S. officials, reported last week that President Trump had ordered that troop numbers be reduced by 9,500, down to about 25,000.

Germany is currently host to some 35,000 U.S. troops, more than in any other country in Europe. The country operates as a hub for U.S. forces coordinating operations in Europe, Africa and the Middle East.

Merkel’s coordinator for transatlantic relations, Peter Beyer, told the Rheinische Post Wednesday that the U.S. proposal was “completely unacceptable, especially since no one in Washington thought about informing NATO ally Germany in advance.”

Foreign Minister Heiko Maas said only that Germany would have to “take note” of any such decision if it happens, in the context of what he referred to as a “complicated” relationship with the U.S. since Trump took office.

On Tuesday, 22 House Republicans sent a letter to the White House arguing that removing troops from Germany would “significantly weaken the United States’ national security and at the same time weaken our position vis-à-vis Russia.”

Former U.S. Army Europe commander Gen. Ben Hodges, who was once stationed in the German city of Wiesbaden, similarly warned against a U.S. drawdown.

“U.S. Forces in Germany are more than our contribution to NATO,” he tweeted. “It is for our benefit, gives us access to Europe, Africa, Middle East, and ensures a Europe that is whole, free and at peace which benefits America’s economy.”

Speculation has arisen that Trump may plan to reallocate the troops to Poland, a NATO member formerly in the Warsaw Pact that borders on the Russian exclave of Kaliningrad.

“I deeply hope that as a result of the many talks that we had ... part of the troops based today in Germany which are being removed by the United States ... will indeed come to Poland,” Morawiecki told the RMF24 radio station. “The decision is now on the U.S. side.”

Last September, Trump signed a joint defense cooperation agreement with Polish President Andrzej Duda which called for supplementing 4,500 rotational troops in Poland with “approximately 1,000 additional U.S. military personnel.” Trump had said the new troops would “most likely” be transferred from other European bases.

Earlier in 2019, when first working on the deal framework, Trump had directly suggested the idea of moving troops from Germany.

Last month, debate over whether to purchase new fighter planes in Germany stoked similar speculation with regard to Germany's continued hosting of 30 U.S. nuclear bombs under a NATO nuclear-sharing agreement. Then, the U.S. ambassador to Poland suggested on Twitter that Poland could host the bombs.

Hal Brands, a professor at Johns Hopkins University’s School of Advanced International Studies, said moving the troops to Poland would be problematic, as it lacks an established infrastructure for hosting a large American contingent.

“Germany provides some of the most generous host-nation support that the U.S. currently receives from its allies – around $1 billion per year in cash and in-kind payments,” he said. “There is no guarantee that Poland, a significantly less wealthy nation, would provide equivalent or greater support per American soldier.”

Lauren Speranza, director of transatlantic defense and security at the Center for European Policy Analysis (CEPA) wrote in an op-ed that it was a “fundamental misconception” that the U.S. defends Europe out of charity.

“In reality, the defense relationship is mutually beneficial: serving both American and European interests,” she wrote.

“Much progress is indeed still to be made by European allies in meeting their obligations on defense spending and capability targets,” Speranza said. “But if Europe and the United States continue to work together, everybody wins.”

Trump has consistently criticized some NATO allies, in particular Germany, for defense spending that remains below NATO targets. Poland is one of nine allies (out of 30) that has met the target – spending two percent of national GDP on defense.