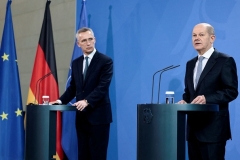 Berlin (CNSNews.com) – “Staying silent is not a sensible option,” German Chancellor Olaf Scholz said in a speech on Wednesday, amid growing voices urging his government to provide a clearer stance on Russia.

“It is still too early to tell whether [talks] will help de-escalate the situation Russia created by concentrating 100,000 troops along the border with Ukraine,” Scholtz told the online Davos Agenda event. “But after years of rising tensions, staying silent is not a sensible option.”

Tensions between Russia and the West over the amassing of Russian troops near Ukraine’s border have sparked a flurry of high level talks in Europe in a bid to avoid conflict through dialogue.

Secretary of State Antony Blinken is following up this week with visits to Kyiv, Berlin, and Geneva, where he plans to meet with his Russian counterpart, Sergei Lavrov on Friday.

Scholz stressed Germany’s “commitment to Ukraine’s territorial integrity,” and said Russia was “aware of our determination.”

“I hope they also realize that the gains of cooperation outweigh the price of further confrontation,” he added.

The chancellor’s comments echoed his statements a day earlier, where he said Russia would pay “high economic, political costs” should it invade Ukraine. On both occasions he did not provide details.

Visiting the Russian capital earlier this week for talks with Lavrov, German Foreign Minister Annalena Baerbock said it was hard not to see the stationing of some 100,000 Russian troops near the Ukrainian border as a “threat.”

Baerbock also stressed the importance of dialogue, however, and called for reviving the so-called Normandy format talks between Germany, France, Russia, and Ukraine.

“We don’t threaten anybody with anything, but we do hear the threats addressed to us,” said Lavrov. “We will act in accordance with concrete steps, concrete actions. And our reaction will be obviously predicated on what concrete steps our partners take.”

Despite the words of Scholz and Baerbock, critics are pushing for clarity from the new government, including details of how Germany would respond if Russia invades Ukraine, and whether sanctions that follow would include an end to the controversial Nord Stream 2 Russia-to-Germany gas pipeline.

“We need a German chancellor who takes a firm stand on these issues and clearly names the price of military aggression against Ukraine,” he told Handelsblatt.

“The clearer the consequences of aggression are described, the more realistic it is that we prevent war,” Weber said.

He also called for Nord Stream 2 to be shut down.

“The pipeline was a mistake from the start because it increases Europe's dependence on Russia and is driving the E.U. apart,” he said. “Our German energy policy is a self-created dilemma. We bet too heavily on Russia. Now we have to think about new sources as soon as possible.”

More than 70 German academics and foreign policy experts in an open letter have called for a firmer German policy on Russia, arguing that Europe’s largest economic power has been watching Russia’s troubling activity “critically but largely inactively for the past three decades.”

“The Federal Republic’s Russia policy must be fundamentally corrected,” they wrote in German, saying that “purely verbal or symbolic reactions from Berlin” will – as has happened in the past – “only tempt the Kremlin into further escapades.”

“Berlin must bridge the gap between its public rhetoric and real practice in Eastern Europe,” the signatories wrote. “This should be expressed in a series of parallel and concrete measures of a political, legal, diplomatic, civil society, technical and economic nature.”

Asked about Nord Stream 2 on Tuesday, Scholz said Germany wants to “become completely independent of the use of fossil fuels” – a key argument by pipeline advocates in favor of bringing in more natural gas from Russia.

He also conceded that Germany feels “responsible for ensuring a continuation of the gas transit via Ukraine.” (Critics of Nord Stream 2 worry that Russia will use it to punish Ukraine, which currently earns important transit revenue from gas pipelines crossing its territory from Russia to the West.)

NATO secretary-general Jens Stoltenberg acknowledged in an interview Tuesday that Nord Stream 2 is a point of division among NATO allies, and that even within Germany “there are different views.”

“Some are heavily against the new pipeline. Others are more in favor – at least saying that this is a commercial decision to be taken,” he said.

Asked whether those who defend the pipeline as a commercial project include the German chancellor in his view, Stoltenberg answered in the affirmative.

He also noted that German regulatory authorities have suspended the process of certifying the new pipeline, without which gas cannot begin flowing. Russia has downplayed the delay, saying that approval was only a matter of time.