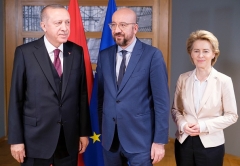 Berlin (CNSNews.com) – European Union-Turkey relations are at a “historic low point,” and the E.U. should halt negotiations on its aspiring membership, members of European Parliament (MEPs) said this week.

They cited Turkish President Recep Tayyip Erdogan’s backsliding on the rule of law, a “hostile” foreign policy, and Ankara’s refusal to recognize the mass killings of Armenians a century ago amounted to genocide.

The parliament on Wednesday adopted an annual report on Turkey, which calls on the bloc’s executive Commission to suspend long-stalled accession negotiations with Turkey unless it reverses the negative trend.

“In recent years, the government of Turkey has distanced itself increasingly from E.U. values and standards,” parliament said in a statement. “As a result, relations have been brought to a historic low point.”

Parliamentary rapporteur Nacho Sánchez Amor said the report, which was adopted by 480 votes to 64, with 150 abstentions, was “the toughest yet” in its criticism on Turkey.

“We would need to see Turkey reverse its current autocratic drift, in which any kind of critical voice is quashed, and comply with its international commitments, including the rulings by the European Court of Human Rights and the Venice Commission’s recommendations,” he said.

MEPs called on Turkey to release imprisoned human rights defenders, journalists, lawyers, academics and others; stop what it described as hostile foreign policy towards member states Greece and Cyprus; and acknowledge the Armenian genocide.

They said member-states should designate the extremist Turkish movement known as the Grey Wolves as a terror group and ban it in Europe.

The ultranationalist group, which the MEPs accused of threatening people with a Kurdish, Armenian or Greek background, operates both in Turkey and in the Turkish diaspora, and is linked to the Nationalist Movement Party, a political ally of Erdogan’s ruling Justice and Development Party.

(The French government banned the Grey Wolves in that country last November, prompting Turkey’s foreign ministry to complain that France should “protect the freedom of assembly and expression of Turks in France.”  Turkish authorities do not acknowledge the existence of a formal group by that name.)

The Turkish foreign ministry called the parliamentary report “unacceptable” and “by no means objective.”

“As a candidate country, Turkey expects the EP to carry out constructive efforts about how the relations can be improved with Turkey and how it can contribute to Turkey’s E.U. integration process, rather than being a platform for baseless allegations and blind accusations against Turkey,” it said.

Relations are strained over Turkey’s dispute with Greece and Cyprus over gas exploration in their waters that escalated last year.

Turkish control of the northern part of E.U. member Cyprus – since 1974 – continues to be an unresolved irritant in the relationship.

A recent U.N.-backed conference on Cyprus failed to make any progress after Turkey insisted on a two-state solution to the dispute, which Cyprus rejected.

Even before the latest developments, Turkey’s negotiations on joining the E.U. have been dogged by crises since starting in 2005.

The E.U. Commission said last year the process had “effectively come to a standstill” over the Turkey-Cyprus tensions and human rights concerns, which largely stemmed from the government’s harsh crackdowns after a failed coup-attempt in 2016.

At the same time, the process was not formally suspended, which is what the EP is calling for again now.

Turkey says it still sees membership in the E.U. as a strategic aim, a stance Erdogan reaffirmed in a statement on “Europe Day” a fortnight ago.

In what appears to be a bid to strengthen its links to the E.U. by other means, Turkey has applied to join a European military cooperation program known as Pesco, which aims to enable the rapid transport of military personnel and military equipment inside and outside Europe.

The project was recently opened to non-E.U. members, with the U.S., Canada and Norway the first to join.

The Netherlands, which leads the project, confirmed this week that Turkey has now also applied.

Pesco membership for parties outside the E.U. must be unanimously agreed upon by all E.U. member-states. Amid current tensions over the Mediterranean energy disputes, neither Greece nor Cyprus are likely to support Turkey’s request.

Erdogan plans to visit the northern part of Cyprus on July 20 to mark the 47th anniversary of the Turkish occupation there. He indicated on Wednesday that he would use the opportunity to make a major announcement.

“I will voice a message that will concern not only the island but also the whole world,” he said in televised remarks. “Don't be surprised if we give you news about oil and natural gas,” he added.