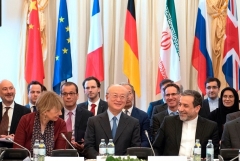 Berlin (CNSNews.com) – Six former European diplomats are calling on European governments to coordinate efforts to urge an incoming Biden administration to rejoin the Iran nuclear deal, from which President Trump withdrew in 2018, and to agree with the regime in Tehran on steps for mutual compliance.

The call comes amid fears that Friday’s assassination of nuclear scientist Mohsen Fakhrizadeh could complicate attempts to restore the deal known as the Joint Comprehensive Plan of Action (JCPOA).

“In response to reimposed U.S. sanction [sic] since 2018, Iran has increased its nuclear activities and continues to step away from its commitments under the JCPOA,” said the diplomats in a statement published by the European Council of Foreign Relations (ECFR).

“The Trump administration’s maximum pressure campaign against Iran has failed,” they charged.

The six men called on European governments, particularly the trio that are parties to the JCPOA, Germany, France and Britain, to urge the next U.S. administration to rejoin the agreement.

They said the JCPOA parties’ joint commission should meet before the next administration begins on January 20, and that the three E.U. parties and Iran meet before then to discuss technical steps.

E.U. foreign policy chief Josep Borrell on Monday announced that the joint commission will in fact meet, in Vienna on December 16, to “discuss ongoing work to preserve the JCPOA and how to ensure the full and effective implementation of the agreement by all sides.” The commission comprises the three European parties, Russia, China, and Iran itself.

The E.U. is hoping a Biden administration will be able to undo Trump’s U.S. departure and the reimposition of sanctions on the regime.

Former Vice President Joe Biden said in September that “if Iran returns to strict compliance with the nuclear deal, the United States would rejoin the agreement as a starting point for follow-on negotiations.”

Earlier in the year Biden’s foreign policy advisor Tony Blinken – now nominated as the next secretary of state – said a Biden administration would return to compliance if Tehran did, but would then look to partners and allies to support efforts to “negotiate a longer and stronger deal.”

Trump pledged when running for the White House to withdraw from the JCPOA. Criticisms of the deal included “sunset” clauses, under which key provisions expire after 10-15 years, verification measures seen as flawed since Iran refused to allow foreign inspectors free access to its military sites, and the fact the agreement did not cover ballistic missile programs or other provocative Iranian activity in the region.

Fakhrizadeh’s death has raised fears in Europe that the killing could complicate efforts for the U.S. to return to the JCPOA. The regime is blaming “mercenaries” for an attack it says was arranged by Israel and the United States.

Mark Fitzpatrick, a former State Department official and associate fellow at the International Institute for Strategic Studies, said on Twitter assassinating Fakhrizadeh was designed to hinder the possibility of international diplomacy, rather than to counter Iran’s ability to wage war.

But Dennis Ross, a fellow at the Washington Institute for Near East Policy and former special assistant to President Obama, questioned claims that the attack was timed ahead of Biden taking office.

“One can debate the logic of killing of Mohsen Fakhrizadeh. But to argue it was done to frustrate the incoming Biden Administration ignores reality,” Ross tweeted. “Such an operation takes extensive planning, having operatives on the ground, actionable intelligence. It can’t be spur of the moment.”

Germany, France and Britain have so far avoided taking strong stances on the killing of Fakhrizadeh, opting instead for calls for caution and restraint.

“All those involved are urgently called on to refrain from steps that could lead to a further escalation of the situation,”  German Foreign Minister Heiko Maas told local media at the weekend, while British Foreign Secretary Dominic Raab said, “We are concerned about the situation in Iran and the wider region we do want to see de-escalation of tensions.”

Borrell in a statement called the killing “a criminal act and runs counter to the principle of respect for human rights the E.U. stands for.”

“In these uncertain times, it is more important than ever for all parties to remain calm and exercise maximum restraint in order to avoid escalation which cannot be in anyone’s interest.”