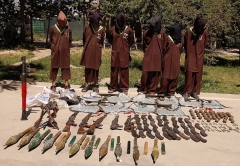 (CNSNews.com) – With more than 20 terror groups active in Afghanistan, can the U.S. ensure its own national security?

As the U.S. military moves towards withdrawing its remaining troops from Afghanistan, the curtain call on an almost two-decade war spurred by the September 11 attack on America, questions linger over precisely what control Washington will have in ensuring that the country does not again become a sanctuary for terrorists to plot attacks on western soil.

The mandate is at the forefront of the controversial February 2020 agreement between the U.S. and the Taliban, the main commitment the group has made to fulfill its end of the deal. But the fact Afghanistan is a hub for numerous U.S.-designated foreign terrorist organizations (FTOs), coupled with the loss of much of the U.S.’s intelligence and tracking capabilities as a result of the troop pullout, has many analysts and experts scratching their heads.

Since 2017, military analysts have identified some 20 terror groups operating against the Afghan government, a figure that has largely remained steady, despite the splintering and morphing of different outfits.

“The counting of how many different groups operate in Afghanistan is more an art form than a counting job since terrorist networks had the habit of changing, cooperating and separating over the past two decades,” said Dr. Hans-Jakob Schindler, senior director at the Counter Extremism Project. “What is clear is that, in addition to the Taliban, there are several additional groups operating in Afghanistan.”

They include the remnants of a decimated but not dead al-Qaeda network, ISIS, the Haqqani Network – a Taliban offshoot known in the U.S. for having held U.S. soldier Bowe Bergdahl captive – as well as a patchwork of other violent groups including Lashkar-e-Taiba, Lashkar-e-Jhangvi, Jaish-e-Mohammad, the Pakistani Taliban (Tehrik-e Taliban Pakistan), and the Islamic Movement of Uzbekistan. All of these are U.S.-designated FTOs.

As President Ashraf Ghani has noted, many of these terrorist groups are based in, or have some form of a coordinating presence in, neighboring Pakistan.

“Most groups are regionally focused and present first and foremost a threat to Afghanistan, Pakistan, Central Asia and potentially Iran,” Schindler said. “However, of course, al-Qaeda as well as [ISIS] are still determined to conduct attacks on the U.S. homeland and their presence in any of the global conflict zones will always be of a concern. And Afghanistan continues to be, of course, a very active conflict zone which is permissible for terrorist organizations.”

Authorities have attributed the ongoing terrorist and insurgency scourge primarily to the expansion of unregistered mosques and radical madrassas (Islamic religious schools). The State Department has previously cautioned that nearly two-thirds of Afghanistan’s 1,500 madrassas are not registered.

Then there’s the Taliban itself. In an intelligence assessment made public earlier this month, officials cautioned the Biden administration that the fundamentalist group is likely to make territorial gains and that the Kabul-based government “will struggle to hold the Taliban at bay if the coalition withdraws support.” CIA Director William Burns is also reported to have made an unannounced trip to Afghanistan in recent days as concerns about the pullout grow.

Despite the Taliban’s use of classic terrorist tactics, including suicide bombings, targeted assassinations, abductions, the use of improvised explosive devices, and the slaughtering of civilians, the U.S. government has never designated it as an FTO.

Designation would allow the U.S. to issue visa restrictions, impose economic sanctions, and pursue individual prosecutions. But the step has been deliberately not taken in the case of the Taliban in order to enable negotiations, such as those in Doha that produced the Feb. 2020 agreement, to go ahead in a bid to find a diplomatic solution to the conflict.

“On the one hand, the Taliban have for years maintained that they will not allow international attacks being planned from within Afghanistan,” Schindler said. “On the other hand, they have – until now – never gone beyond that statement and have not issued a statement clearly separating themselves from al-Qaeda.”

The U.S. is still in the process of determining how to carry out counter-terrorism measures without having troops on the ground.

“If you leave Afghanistan and you want to go back in to conduct these operations, there are three things you need to do: You need to find the target; you need to fix the target; and you need to be able to finish the target,” U.S. Central Command commander Marine Gen. Kenneth McKenzie told the House Armed Services Committee last week. He added that some troops will remain in the wider region, citing “offshore, over-the-horizon options.”

If catastrophe does occur in Afghanistan, the U.S. will have the means to go back in, though with some difficulty. McKenzie said diplomats are working to find new locations in the broader region as bases for intelligence assets.

How successful the contingency plans will be remains to be seen.

“The reality is that the Taliban is the mother all terrorism in the region now,” said Ahmad Muslem Hayat, a former Afghan military attaché in London. “The Taliban and these groups all have the same vision and ideology against western interests,” he said. “The United States should not give up on Afghanistan.”