Terrorist Landscape in Afghanistan Poses Challenges After the US Withdrawal 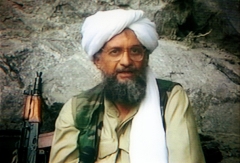 Al-Qaeda leader Ayman al-Zawahiri, if he’s still alive, is believed to be holed up somewhere along the Afghan-Pakistan border. (Photo by Maher Attar/Sygma via Getty Images)

(CNSNews.com) – As the U.S. military prepares to make its final withdrawal from Afghanistan over the coming weeks, much attention is being paid to the Taliban’s stampede to take over the country.

However, that is not the only brutal insurgency with a foothold in the fragile region. While the Afghan Taliban itself is not a U.S.-designated foreign terrorist organization (FTO) there are plenty of such groups present in the area.

In 2017, Afghanistan’s security and defense departments reported that some 20 local and international terrorist groups were not only fighting the government in Kabul, but also seeking to expand their footprint to operate on both sides of the Afghanistan-Pakistan border.

According to multiple security assessments in from the U.S. and Afghanistan, that figure has remain largely unchanged.

So who are these other terror ensembles?

Al-Qaeda: While significantly downgraded from the deadly outfit it was 20 years ago, core al-Qaeda still has a presence in the region. U.S. and coalition forces killed a number of the organization’s top echelon over the past two decades, and the location and fate of current leader Ayman al-Zawahiri is not clear.

However, a 2020 United Nations report estimated that al-Qaeda still had up to 600 members who manufacture bombs, raise funds, and occasionally take up arms alongside their longstanding Taliban allies. Central Command commander Gen. Kenneth McKenzie last year describes Afghanistan as the “home of al-Qaeda.”

Last October, Afghan special forces killed the assumed al-Qaeda number two – and AQIS propagandist – Abu Muhsin al-Masri in Ghazni province. They reportedly found messages indicating that he had been instructing counterparts in Syria and gunning to restore Afghanistan at the organization’s main stage, akin to the pre-9/11 era.

Al-Qaeda is believed to be responsible for carrying out a string of attacks across eastern and south-eastern Afghanistan, and has celebrated the 2020 U.S.-Taliban agreement as a triumph.

ISIS-Khorasan (ISIS-K): The regional offshoot of the Islamic State, ISIS-K generally fights against the Taliban, although in certain pockets the terror group has been known to join forces with the Taliban to battle Afghan government forces.

ISIS-KP, which announced its formal allegiance to ISIS chief Abu Bakr al-Baghdadi in early 2015, is responsible for a string of barbaric bombings and attacks, especially in urban areas of Afghanistan. (Baghdadi was killed during a U.S. special forces raid on a compound in northwestern Syria in October 2019.)

Haqqani Network: Founded by the late anti-Soviet jihadist Jalaluddin Haqqani, HQN is a partially-autonomous wing of the Afghan Taliban and a strategic al-Qaeda partner.

Designated an FTO in 2012, the HQN has carried out scores of deadly assaults on U.S. and coalition forces. Intelligence assessments that year asserted that it was to blame for the death or injury of more than 1,300 U.S. troops in the first decade of the Afghan war alone.

While those three terror groups remain the most prominent, a number of others with similar ideologies, tactics and goals operate in the Afghanistan/Pakistan region.

LeT, JeM, LJ, TTP, and AAI have all been designated FTOs by the U.S. government.

With the U.S. pullout and Taliban’s purported agreement not to allow safe harbor or allow terror groups to use Afghan soil to plot attacks against the U.S. and its interests, what comes next for these groups remains unclear.

“[Al-Qaeda and ISIS] are groups seeking to control Kabul in order to conduct international attacks, including against U.S. targets and other interests,” said Matthew Schmidt, national security and political science coordinator at the University of New Haven.

“These groups want Afghanistan as a base of operations for developing plans and conducting training for attacks against U.S. and allied targets. They also want control the lucrative heroin production system to fund themselves.”

Schmidt argued that “in many ways the U.S. is hoping for a Taliban win as the lesser of the evils, because they are not interested in international terrorism.”

“Per the agreement the U.S. maintains the right to attack international terrorist groups in Afghanistan,” he said. “The U.S. is in essence keeping overwatch for the world.”

But Thomas Joscelyn, senior fellow at Foundation for Defense of Democracies (FDD) and senior editor of FDD’s Long War Journal, said, “A victory for the Taliban would be a victory for al-Qaeda and several of the al-Qaeda-affiliated groups.”

“Al-Qaeda has fought to resurrect the Taliban’s Islamic Emirate for the past 20 years and wants to use a Taliban victory to show that the jihadists can achieve victory against superior powers,” he noted. “There are already indications that foreign jihadis are relocating to Afghanistan to join the fight and set up new operations.”

In Joscelyn’s view, the U.S.-Taliban agreement is a farce.

“The Taliban supposedly agreed to several counterterrorism provisions that were intended to limit al-Qaeda. But the reality is that the Taliban has done nothing to satisfy these conditions and every piece of publicly available reporting indicates that the Taliban and al-Qaeda remain closely allied,” he said.

“Once one understands the depth of the Taliban-al-Qaeda alliance, it becomes clear that a separation between the two was always an American fantasy.”