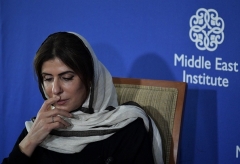 Princess Basmah bint Saud bin Abdulaziz Al-Saud speaks during a discussion on the role of women in the Middle East, at the Middle East Institute in Washington in 2017. (Photo by Mandel Ngan/AFP via Getty Images)

(CNSNews.com) – Almost 28 months ago, a prominent Saudi princes and her adult daughter “disappeared” from their Jeddah residence after a visit from at least eight armed men in the dead of night.

They have had virtually no contact with family members, some of whom are appealing to President Biden – who pledged to make human rights a centerpiece of his foreign policy agenda – to intervene with the authorities on her behalf.

Basmah, a mother of five, has long been an outspoken advocate for constitutional reform and against human rights abuses in the kingdom, and the family’s legal adviser, Henri Estramant, believes she has been targeted for her political activism.

“Princess Basmah for decades has been bringing attention to different causes, such as asking for the improvement of the rights of women and of foreign workers,” he said. “Her activism is not something that she just started a few years ago.”

“The real reason why [Saudi authorities] are keeping her in jail is that they are afraid of her. She has been very outspoken.”

Estramant expressed hope that the case would be raised in the House Foreign Affairs Committee this week.

Basmah's predicament has also garnered attention from members of the European Parliament.

“The princess is a woman who has been calling for reforms and has no access to justice or a lawyer,” said Eva Kaili, a Greek member of the European Parliament who was part of a delegation that visited the kingdom earlier this year/

“Freedom of speech is where we in Europe base our democratic values, so it is important that we do not have double standards. We must raise awareness of these issues, on women’s rights issues and human rights abuse, until we see results.”

Over the past week, Kaili and other MEPs have written to European Council president Charles Michel, urging him to cancel a planned meeting to Saudi Arabia – or if he does go, to meet with King Salman only, not with the controversial Crown Prince Mohammed bin Salman.

A person closely connected to the princess’ family, who requested anonymity due to safety concerns, said Basmah had been due to receive urgent medical treatment for a heart problem prior to her arrest, and that the family has been told both women have not received adequate medical attention while detained.

“The most important thing is their health. Everything else after that can be taken care of,” the person said. “We need to make sure first that their health is okay.”

In recent years, Basmah has become a vocal critic of Riyadh’s military involvement in neighboring Yemen, has called for amendments to limit the powers of religious authorities, has pushed for gender equality, and shone a light on layers of corruption in the regime’s leadership. All are believed to have attracted the ire of numerous senior officials, including Mohammed bin Salman.

Moreover, Bashmah’s bloodline is seen as a potential alternative lineage to the throne. She is the youngest daughter of King Saud, who ruled from 1953 to 1964 and had at least 107 children with three wives before his death in 1969.

In response to queries from U.N. rights officials, Saudi Arabia claimed the princess “is accused of criminal offences involving attempting to travel outside the kingdom illegally,” and that “her personal opinions or activities had no bearing on the case.”

It said her daughter, Suhoud, had been “arrested for the offence of assaulting an agent while he was while [sic] carrying out his duties and a cybercrime.”

No official charges have been filed, however, and Basmah is far from the only high-profile Saudi to have been swept up in a crackdown in recent years.

Between 2017 and 2019, Mohammed bin Salman had hundreds of royals and top officials detained in what was termed an anti-corruption purge.

The most prominent still behind bars is Mohammed bin Nayef, a former crown prince who has been a close confidant of the princess.

(King Salman in a 2017 royal decree deposed bin Nayef, his nephew, and replaced him with Mohammed bin Salman, the king’s son. The subsequent purge was seen as a bid by the new crown prince to sideline potential rivals.)

Estramant said little attention has been given to the issue of “why women are being penalized harsher than men in Saudi Arabia,” pointing out that female detainees are often placed in maximum-security prisons while some of the targets of the purge have been accommodated in luxury hotels.

The Saudi foreign ministry did not immediately respond to a request for comment.