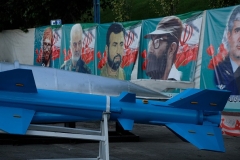 An Iranian-made ballistic missile on display at the Holy Defense Museum in Tehran. (Photo by Kaveh Kazemi/Getty Images)

(CNSNews.com) – As talks continue in Vienna in a bid to resume the 2015 Iran nuclear deal abandoned by the Trump administration three years ago, foreign policy observers are also raising red flags about Tehran’s expanding stockpile of conventional weapons.

In particular, the regime’s proliferation of ballistic missiles is seen as an increasing threat to America’s allies and interests in the volatile region.

Although Iran has for four decades been party to the nuclear Non-Proliferation Treaty (NPT), it is not a member of the Missile Technology Control Regime (MTCR) or The Hague Code of Conduct against Ballistic Missile Proliferation.

“[Iran’s arsenal] is wonderfully integrated and simply huge. It has also stood the test of time and sanctions," said Miguel Miranda, an expert specializing in military technology in Asia.

He emphasized that much of the manufacturing process is domestic rather than relying on imported technology.

Since the end of the 1980s Iran-Iraq war, Tehran has turned its attention to rebuilding its depleted arsenal while also establishing itself as a force to be reckoned with, both directly and through proxies in Lebanon, Yemen and Iraq.

According to the Newlines Institute, a foreign policy think tank, Tehran has placed a priority on developing ballistic missiles.

“Progressing from largely inaccurate models such as the initial Scud-type derivatives, Iran has now begun fielding much more accurate models in larger numbers, including the Fateh-313 used in the January 2020 strike on U.S. bases in Iraq,” it said in a report last year.

“Iran has also successfully sought to diversify its offensive capabilities by developing cruise missiles and strike drones, as shown in the September 2019 Abqaiq-Khurais attack on Saudi energy facilities.”

An analysis published last month by monitoring site Iran Watch observed that “Iran’s missile arsenal is the largest and most diverse in the Middle East,” citing “substantial improvement over the past decade in the precision, accuracy, and survivability of its missiles, which make them an increasingly potent conventional threat.”

While Iran’s conventional forces (known as the Artesh) are often stuck with dated but functional equipment, such as old CH-47 Chinook helicopters and M60 Patton tanks, the Islamic Revolutionary Guard Corps (IRGC) and its Qods Force are equipped with the most sophisticated weaponry Iran can obtain.

Due to decades of economic sanctions and import restrictions, much of its arsenal is locally developed and manufactured, with the regime directing its limited cash flow towards military rather than social spending.

Given its achievements while constrained, experts expect the unlocking of billions of dollars under a resumed Joint Comprehensive Plan of Action (JCPOA) will have a significant impact.

Recent innovations, according to Miguel, include a cruise missile likely patterned on a Soviet design with a range exceeding 1,200 miles.

Iran has also developed a variety of drones, from handheld propeller-driven spy planes and long-endurance models with bombs affixed to their wings, to the notorious Saeqeh, a jet-powered UAV able to launch munitions.

Iran is no longer subject to a U.N. conventional arms embargo, which for ten years prohibited it from purchasing certain foreign weaponry and related materials but expired last October. (Attempts by the Trump administration to extend it were shot down in the U.N. Security Council.)

The expiry means Iran is free to shop around for air defense systems, fighter jets, tanks and armed drones, among other previously restricted equipment.

“Iran has expressed interest in buying weapons, now that it can, and some arms exporters have talked to Iranian buyers, but there have not been major deliveries to date,” said Eugene Gholz, an associate professor of political science at the University of Notre Dame. He described the end of the embargo as “a potential game-changer.”

China is the other likeliest supplier of weaponry to Iran, which has shown interest in buying loitering munitions (“kamikaze drones”) as well as UAVs and armed crewless boats.

The regime has repeatedly declared its ballistic missile program a non-negotiable, and insisted – with Russian and Chinese backing – that it be left off the table in the talks that produced the JCPOA.

“Its substantial arsenal of ballistic missiles is designed to overwhelm U.S. forces and our partners in the region.”

“Its swarms of small boats, large inventory of naval mines, and an arsenal of anti-ship missiles can severely disrupt maritime traffic in the Strait of Hormuz – a strategic chokepoint critical to global trade,” the report said. “Each of these forces are becoming increasingly survivable, precise, and responsive.”