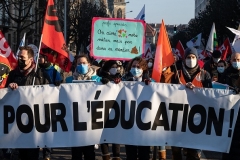 French teachers and supporters demonstrate in Strasbourg last week to protest the government’s response to the pandemic in schools. (Photo by Patrick Hertzog/AFP via Getty Images)

Paris (CNSNews.com) – The French government’s handling of the surge of the Omicron variant of the coronavirus has sparked unrest in the education sector, as teachers demonstrate against rules which they say are not doing enough to help relieve the situation.

Police in Paris have banned a protest planned for Thursday, saying they did not receive adequate notice to allow it to go ahead.

After protests held last week, teacher unions and organizations representing students and parents are calling for the demonstrations to continue, until the government responds more strongly to the chaos caused to schools by the crisis.

The Omicron variant of the virus causing COVID-19 is circulating rapidly in the country, mainly in primary and secondary schools. It is officially estimated that some 160,000 children aged 6-10 are becoming positive every day, a figure validated by epidemiologists.

Although vaccinations are recommended here for children under 12 years old, only 120,000 children, barely two percent of those eligible, have received the jab.

All schools are now operating and with effect from January 3 children aged six and up are required to wear masks, in indoor and outdoor settings. Previously mask-wearing was mandatory only from the age of 11.

From the start of the school year this month, the general principle has been that classes do not close unless a case of COVID-19 is detected. The education ministry said on January 6 that 10,800 classes were closed out of a total 530,000.

The unions say the tougher rules introduced this month do not go far enough, and want more action in the high school and college sectors.

They are calling for more staff, to replace those who are infected and must stay home, and for greater protections for those who are working. The unions also want clear protocols to be implemented in primary, secondary schools, and colleges for when pupils or teachers test positive.

There is also a great deal of confusion about how schools are meant to respond to infections. The government published a series of protocols to follow but they are complicated to implement, as they are based on the number of pupils or teachers tested positive in a class.

The unions do not want schools to be closed, but are demanding stronger measures to protect staff and student alike.

Teachers and parents say young people are being affected in various ways by the pandemic and health measures, with emotional and psychological breakdowns reported.

These developments are taking place against the backdrop of a presidential election campaign, and all sides are hoping to use the pandemic to gain votes.

Unions and parent’s association want to use the crisis to promote their favored candidates and draw votes away from President Emmanuel Macron. Lawmakers supporting Macron’s rivals are eager to use the confusion to highlight perceived government failures to deal with the pandemic.

Education Minister Jean-Michel Blanquer has said the government wants to keep schools open, even if cases of COVID-19 emerge. Face-to-face teaching will continue, along with screening tests on students who were in contact with infected classmates or teachers.