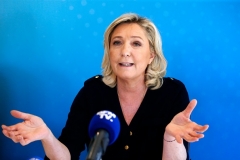 Paris (CNSNews.com) – Marred by a poor turnout, the first round of regional elections in France on Sunday was a disappointment for the far-right National Rally party, but it still stands a chance of winning a region for the first time ever, in next Sunday’s second round.

Marine le Pen’s party is ahead in the prosperous Provence-Alpes-Côte d'Azur (PACA) region in the south east, with its candidate Thierry Mariani having obtained 36.3 percent of the votes to 31.9 percent for the center-right Republican incumbent, Renaud Muselier.

The National Rally has never controlled one of France’s 11 regions, and is now closer to doing so than ever before.

But a decision Monday by the third-placed Greens candidate, Jean-Laurent Félizia, to withdraw ahead of the second round could dash those hopes for Le Pen.

Félizia, who won 17 percent of the vote in the first round, had intended to contest the second round, but his party’s leadership, backed by other left-wing parties, pressed him to pull out rather than split the anti-National Rally vote and risk handing victory in PACA to the far right.

So far, however, Félizia hasn’t advised his followers who they should vote for, and if National Rally voters turn out in large numbers on Sunday their candidate could still win.

At a national level, Le Pen’s party did not do as well as had been predicted, obtaining 19.3 of the votes, nine points lower than in the last regional polls, in 2015.

The Republicans led with 28.4 percent, while the Socialists took 15.8 percent. President Emmanuel Macron’s Republic in Motion movement obtained just 11.2 percent in conjunction with its the Democratic Movement allies.

Republic in Motion is therefore not expected to be present for the second round in most regions, which look likely to be won variously by Republican and Socialist candidates.

In view of the poor turnout, pollsters and experts said they could not predict who would likely run in the 2022 presidential elections against Macron, who is expected to stand for another term.

At a national level, 68 percent of voters did not cast ballots. Regional elections tend not to energize voters in France, although experts also attributed the high rate of abstention this time to the recent opening up after months of coronavirus lockdowns, saying many probably wanted to take advantage of their new freedom and enjoy a summer Sunday.

A disappointed Le Pen blamed the high number of abstentions.

“Our voters did not come to vote,” she told the press, urging her supporters to “wake up.”

“All those who want to express their opposition to the actions of this government which is leading the country to chaos, have the duty to react,” she said. “If you want things to change, you have to vote. If you don’t vote for your ideas, your voice will be lost.”

Although National Rally led in the PACA region, its candidate Mariani had been expected to garner 41 percent of the votes in the first round and up to 51 in the second.

Surveys in recent months showed Le Pen’s party leading in up to six of the regions, but last Sunday’s results fell well below her expectations. As things stand, the PACA region is the only one in metropolitan France which the National Rally stands a chance of winning

In these elections, the party taking the highest number of votes in the second round wins, whether or not it achieves 50 percent.

After the election, the elected assembly in each region elects a president for a six-year term – usually the leader of the party that won the most assembly seats.