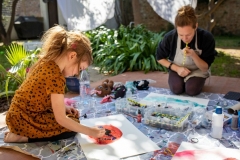 A mother homeschools in France. (Photo by Tim Clayton/Corbis via Getty Images)

Paris (CNSNews.com) – French President Emmanuel Macron’s proposals aimed at countering radical Islamism include a plan to make school mandatory for children aged 3-16 years old children, but parents and organizations that prefer homeschooling – and not just Muslims – are not happy.

In early October, Macron announced the measures which will be presented to the cabinet on December 9 before being discussed by lawmakers. The measures took on new significance after a Muslim man beheaded a teacher who had used a cartoon of Mohammed in a class lesson.

Muslim associations have criticized the proposed ban on homeschooling, and they are not alone. Massimo Introvigne, an Italian sociologist of religion, told European Times that other religious communities, including some groups described as cults, will also be affected.

Many parents who prefer homeschooling for various reasons are stunned, arguing that the proposal is an attack on the educational freedom of families, and is part of an effort to standardize and homogenize individuals across the country.

Most parents who homeschool here are not linked to religious movements but rather oppose state regulation.

Claudia Renaud, member of a non-political, non-religious association for non-schooling families, Children First, told the Reporterre daily that “families often take a child out of school for a year or two, to escape a screaming teacher, so that he can regain his self-confidence.”

“We’re angry” about the proposal, said Renaud. “It looks like the government is using a bazooka to crush an ant. There are already various possibilities for a strict control of family education.”

Sociologist Philippe Bongrand has been collecting data on the subject for years. He says half of homeschooling children in France are unable to attend school because of a handicap or illiness, or because their families may travel a lot for business reasons.

At the same time, he told Reporterre that “it’s impossible to know the precise number of children educated in radicalized families, because the officers responsible for supervising homeschooling education do not explicitly ask parents about their religious beliefs.”

“Testimonies show that there are families with strict religious practices, seen as contrary to the values of the Republic, who do homeschooling. But whether they are Christian, Jewish or Muslim they seem, as far as we can say, very much in the minority.”

“This is nothing new,” Alix Fourest, co-president of an association promoting non-conventional learning and teaching, told Reporterre in reference to Macron’s proposal. “Twenty years ago, family education was accused of being linked to sectarian movements. Now it is radical Islamism. But we are still waiting for a proof of a link [with radical Islamism].”

Fourest’s association and five others in favor of homeschooling have hired a lawyer to take the matter up before the Conseil d’État, which advises the government on the constitutionality of laws.

By law, education is compulsory for all children in France, citizens or otherwise, from three to 16 years old. Parents may choose to educate their child at a public or private school, or at home.

Homeschooled children must be instructed to acquire specific knowledge and skills, and teaching and the children’s progress are monitored.