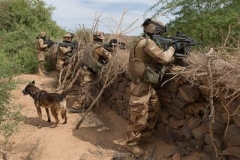 Paris (CNSNews.com) – French President Emmanuel Macron is under fire over a secretive deal that saw jihadists in the Sahel free four hostages in exchange for 200 jihadists freed by the Mali government – and a multi-million dollar ransom.

Adding to the criticism is the fact that one of the hostages – the only French national among them – converted to Islam while held and has expressed sympathy for her former captors, an al-Qaeda-affiliated group that held her for 1,384 days.

“Call them whatever you want, I would say they are armed opposition groups to the regime,” Sophie Pétronin, an aid worker with French and Swiss citizenship, told reporters before her arrival on Friday at a military airport near Paris. Pétronin, who founded an aid agency focused on children in the Malian city of Gao, was welcomed home by Macron, Foreign Minister Jean-Yves Le Drian, and members of her family.

“For Mali, I will pray, implore Allah’s blessings and mercy, because I am a Muslim now,” said the freed hostage, who explained that she had changed her name from Sophie to Mariam and hoped to return to her work in Mali when the government and “armed groups” make peace.

Early last week, with no official explanation, the junta in power in Mali released from jail 200 suspected or convicted jihadists in exchange for the freedom of Pétronin, a Malian lawmaker, Soumaïla Cissé, and two Italian hostages. They had been held for varying lengths of time, in Pétronin’s case since she was abducted in Gao on Christmas Eve 2016.

Left-wing political parties in France expressed relief at Pétronin’s release, but Gilbert Collard, a member of far-right wing National Rally, described her as a “fascinated agent of Islamist propaganda,” and said of the exchange, “The French are really the hostages of [their] own stupidity.”

The party’s leader, Marine Le Pen, wrote on Twitter that the government should disclose to parliament the conditions of the release, adding, “We should never compromise with Islamism.”

Macron and the government has not commented on the release, but has denied claims that a large ransom was paid.

But according to Pierre Conesa, a former defense ministry official and expert in international strategic issues, a ransom of around $235 million was paid – “ a large part of which, I imagine, has been paid from the secret funds of the French state.”

“Hostage taking and their release is a lucrative business,” Conesa said in an interview. “Today three categories of people are taken hostage: journalists, humanitarian workers and tourists who go to a country despite the danger and are kidnapped.”

“What we notice is that from the moment Pétronin converted to Islam, she was treated well,” he said.

As for the release of the imprisoned jihadists, Conesa said the “French military in the region and in France are probably not happy, as they might confront them in the future.”

Since 2014, France has deployed thousands of troops in the Sahel countries of Mali, Niger, Mauritania, Burkina Faso, and Chad, working in conjunction with those countries’ armed forces against jihadists. There are currently around 5,100 French personnel there.

Peer de Jong, co-author of a book entitled Security and Development in the Sahel, told French media that the release of the jihadists was “a real disaster for Mali. Obviously, they will take up arms immediately.”

The freed jihadists reportedly include some prominent figures, including Fawaz Ould Ahmed, a Mauritanian arrested four years ago who was involved in several deadly attacks, including one targeting a restaurant in Bamako in 2015. Another of those released, Abou Dardar, is the former leader of a group known as Movement for Uniqueness and Jihad in West Africa,  who surrendered to French soldiers in 2014 before being handed over to Malian authorities. The group founded in Mali in 2011 was formerly a member of Al-Qaeda’s regional affiliate.