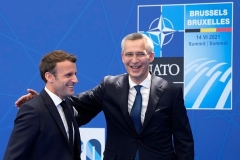 Paris (CNSNews.com) – French President Emmanuel Macron told NATO allies on Monday that France would remain committed to the Sahel region in Africa despite his announcement last week that he was pulling out most of the French forces deployed in an anti-jihadist operation there.

Speaking at a closing press conference in Brussels, Macron said the Sahel decisions were “the subject of very close consultations between our E.U. allied ministers and soldiers.”

“Our commitments in this region of Africa will be kept.”

Last week, Macron announced a decision to withdraw most of the troops involved in Operation Barkhane, a mission launched in 2014 to fight Islamist terrorism in the Sahel countries of Mali, Chad, Burkina Faso, Niger and Mauritania. All are former French colonies.

France has 5,100 troops in the operation, headquartered in N’Djamenah, the capital of Chad.

The French press agency AFP quoted a source close to Macron as saying the decrease would be gradual, with troop numbers down to around 3,500 men within a year, and then to 2,500 by 2023.

Fifty-one French soldiers have been killed since the mission began.

The Takuba operation comprises European forces, including a French component of several hundred soldiers, working with troops from Mali and Niger.

Apart from French troops, Takuba forces include 140 Swedes, mostly special forces, and several dozen Estonians and Czechs. Italy has pledged up to 200 soldiers, and Denmark 100 more. Belgium, the Netherlands and Portugal have also indicated they will support it in the future.

Noting at the press conference that a handful of E.U. member-states are participating in the Takuba mission, along with African partners, he expressed the hope that more would join.

“Sahel security is no longer France’s business, but the international community’s business,” he said.

Macron said the timeframe and modalities for the changes would be announced soon.

Niagalé Bagayoko, chairperson of a pan-African network of experts and organisations working in security, told the France 24 TV channel it was time for a change since the situation in the Sahel has been worsening, with more civilian victims, and terrorist groups expanding.

Malian expert Serge Daniel agreed with Macron’s comment about the Sahel’s security being the business of the international community – and added that in his view the region’s security was primarily the concern of the Sahel countries themselves.

Early this month, French armed forces minister Florence Parly said joint military operations with Malian forces had been suspended. The decision was taken after transitional authorities that seized power in a coup in May began to engage in dialogue with some jihadists groups in the name of  national unity.

Foreign Minister Jean-Yves Le Drian during a visit to the region said France “cannot carry out joint operations with powers which decide to talk to groups that shoot at our children.”

He said there should be “no dialogue or compromise” with terrorists.

Caroline Roussy, researcher at the Paris-based French Institute for International and Strategic Affairs (IRIS), said there was “a lack of enthusiasm from European countries” to joining the Sahel mission, as some viewed it as supporting “French neocolonialism.”

As for African militaries, she said, “despite significant financial efforts, the armed forces of Mali, Niger and Burkina Faso, which are among the poorest countries in the world, remain under-trained and under-equipped.”