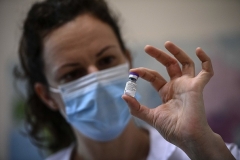 A nurse at the Pasteur Institute in Paris holds a vial of the Pfizer/BioNTech vaccine against COVID-19. (Photo by Christophe Archambault/AFP via Getty Images)

Paris (CNSNews.com) – The French government is reportedly considering imposing a third national coronavirus lockdown, as the number of people receiving a vaccine continues to climb, reaching almost two million as of this week.

President Emmanuel Macron will not make a decision until the end of this week, after assessment information about the impact on the COVID-19 pandemic of a nighttime curfew, which was introduced in November, is available. Macron is also reported to be awaiting the results of figures showing the number of positive cases over seven days per 100,000 inhabitants, which will make it possible to assess the virus’ circulation.

The vaccination campaign, based on the approved Pfizer-BioNTech and Moderna vaccines, got underway very slowly in December but the pace of inoculations has increased notably in recent weeks.

There are also signs of growing acceptance of a vaccine. A recent survey conducted by Odoxa-Backbone consulting found that 56 percent of French people say they want to be vaccinated against COVID-19. At the end of December, an Ipsos survey found 40 percent of French people saying they were willing to be vaccinated. Fourteen percent declared their opposition to vaccines in general.

Many here are dismayed, however, that France is lagging behind in the race to develop safe and effective vaccines against the coronavirus.

The Pasteur Institute, named after the French microbiologist who invented vaccines against rabies and anthrax, Louis Pasteur, announced this week it was stopping its research into a COVID-19 vaccine, since early tests had found it to be less effective than hoped.

That decision angered the scientific community and lawmakers across the political spectrum, many of whom were already unhappy about the French pharmaceutical company Sanofi’s announcement last month that its COVID-19 vaccine would not be available before the end of 2021.

“It’s a sign of the decline of the country and it is unacceptable,” said lawmaker Francois Bayrou, the head of a centrist party aligned with Macron.

“It’s not acceptable that our best researchers, the most brilliant of our researchers, are sucked up by the American system,” Bayrou told France Inter public radio. He was referring to Stéphane Bancel, the French CEO of the U.S. company Moderna, whose COVID-19 vaccines has been approved and is being administered in the United States and Europe.

Socialist politician Segolene Royal, a former presidential candidate, said liberal ideology has led to a reduction in public funding for research in general.

Communist Party head Fabien Roussel called the vaccine situation a humiliation for France, and Bastien Lachaud, a lawmaker from the leftist Rebellious France movement, said it was outrageous that “the land of Pasteur” has not developed a vaccine.

“This is where the lack of public funding and the primacy of the private sector, the triumph of management and profit lead,” he said. “Macron’s recipes are leading to decline.”

On the far-right, National Rally leader Marine Le Pen told France Info that the long delay on developing a Sanofi vaccine against COVID-19 was “above all the demonstration of the collapse of France in the research area.”

“We don’t have a national vaccine,” she lamented. “We are the only member of the Security Council of the United Nations that does not have our vaccine.”

The public health administration reported that 22,000 new COVID-19 cases were reported in the 24-hour period from Monday to Tuesday this week, and 3.1 million in total. Since the pandemic began, France had recorded close to close to 75,000 deaths linked to the virus, including 352 over the past 24 hours. More than 3,000 COVID-19 patients are now in intensive care.

Meanwhile, data available to the scientific community has not shown a noticeable effect as a result of extending the nighttime curfew by three hours. When instituted last November, the curfew ran from 9 PM to 6 AM, but it was recently extended to begin at 6 PM.