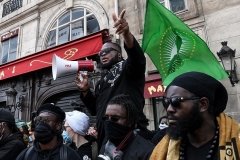 Members of the Black African Defence League protest near the U.S. Embassy in June 2020. (Photo by Anne-Christine Poujoulat/AFP via Getty Images)

In his sights is the Black African Defense League, a Paris-based organization that describes itself as “a revolutionary movement for the defense of the rights of people of African descent and Africans.”

“I have decided to launch the procedure initiating the dissolution of the Black African Defense League,” Darmanin said in a tweet. “The speech of this racist structure call for hatred and discrimination.”

Speaking to reporters, he cited an incident Saturday in the small town north-west of Paris, Val-de-Reuil, where around 100 people invaded a town hall during a wedding ceremony attended by the mayor.

Darmanin accused the organization, known by the French acronym LDNA (Ligue de Défense Noire Africaine) of being responsible for the incident.

That same day, the LDNA had called for a rally in a response to an incident that sparked racial tensions in the town a week earlier.

According to the town’s mayor, Marc-Antoine Jamet, “thirty racist and violent individuals invaded the town hall and were joined by 70 others. Then they tore down the door of the council chamber and violently pushed an elected official.”

The LDNA denied the claims, saying on its website “no physical assault was committed against the representatives of the city of Reuil” and saying video footage would back up its assertion.

The earlier problems in Val-de-Reuil apparently flared early this month after a fight between two childen, one black and one of Kurdish origin, prompted adults to step in, leading to a brawl involving around 200 people. A subsequent unauthorized demonstration organized by the Kurdistan Workers’ Party (PKK) witnessed protestors calling for “Death to the blacks” and similar slogans.

Jamet said Saturday’s incident at the town hall was “probably a response to that demonstration.”

There are around 150,000 Kurds in France, mostly in the Paris region. The PKK, which has been waging a separatist struggle with the Turkish state for three decades, is formally considered a terrorist organization in France.

Founded in 2017, the LDNA says its objectives are to fight anti-black racism and promote Pan-Africanism. It claims almost 300,000 subscribers to its Facebook page, and calls itself a “movement against negrophobia, racism, discrimination, neocolonialism, advocating respect for the black community.”

Its founder, Egountchi Behanzin, who is also a rapper performing under the name Gucci IG, describes himself on Twitter as a “political activist, Pan-African resistance fighter, freedom fighter, revolutionary.”

Republican lawmaker Eric Ciotti said the government should dissolve the association, accusing it of “an intolerable new step in violence against France and the Republic.”

Similar calls came from other Republican lawmakers and some from the far-right National Rally.

It’s not the first time the organization has made waves. In June last year, the LDNA held a demonstration – forbidden by authorities due to safety concerns – in front of the U.S. Embassy to protest the death of George Floyd.

During that event, Behanzin publicly described France as “a totalitarian, terrorist, slave, colonialist state,” adding, “The French state is exploiting its own people, so you can imagine what they are doing in Africa.”

After two French soldiers involved in the counter-jihadist mission in Sahel were killed in Mali last January, the LDNA caused an uproar when it commented on its Facebook page that there should be no regret over the deaths of soldiers who should not have been deployed to Mali to protect France’s economic interests.

It called on French people to “mobilize so that [President] Emmanuel Macron repatriates the French military terrorists who die in Africa while protecting the interests of the French criminal bourgeoisie!”

In 2019, the movement demontrated in front of South African Embassy to condemn xenophobic violence by black South Africans against foreigners taking place in that country.

“If you want to be xenophobic, okay,” one of the participants said during the event, to applause. “Kill white people first, kill Chinese first, kill Indians first. Don’t kill your brothers who have the same skin color.”

The state prosecutor for the region where Val-de-Reuil is located told the AFP press agency that once a police investigation into the incident was completed, legal proceedings would follow.

Administrative dissolution of an organization in France by a decree taken in the Council of Ministers,

In the event the government considers that an association is undermining public order, the Council of Ministers can decree its dissolution. In 2019, the Shi’ite Federation of France and a group called the Anti-Zionist Party were dissolved.