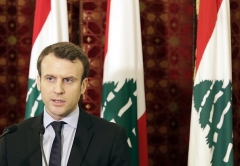 Emmanuel Macron in Beirut on a previous visit to Lebanon. (Photo by Joseph Eid/AFP via Getty Images, File)

Paris (CNSNews.com) – French President Emmanuel Macron’s attempts to leverage the massive blast in Beirut in August to break the long political deadlock paralyzing Lebanon seem to have failed, although he says he won’t give up.

Macron, who has visited the former French colony twice since the deadly explosion at the capital’s port – allegedly caused by a large quantity of stored ammonium nitrate – lashed out early this week at Lebanon’s political parties for their failure to form a new multi-party government under prime minister-designate Mustapha Adib, to work on solutions to Lebanon's political and financial problems.

He was speaking a day after Adib resigned after failing to form a government. Adib threw in the towel after criticizing Lebanon’s two main Shi’ite movements, Hezbollah and Amal, for making what he viewed as unreasonable demands relating to cabinet posts in a new government.

Macron declared himself “ashamed” of Lebanon’s political class, accusing leaders of  having “chosen to privilege their partisan interests to the detriment of the general interest of the country.”

He reserved his strongest criticism for Hezbollah, the Iranian-backed Shi’ite terrorist group that also operates as a political party in Lebanon.

“Hezbollah cannot at the same time be an army at war against Israel, a militia unleashed against civilians in Syria, and a respectable party in Lebanon,” he said. “It has clearly shown the opposite in recent days.”

“Is it really a political party or does it proceed just in a logic dictated by Iran, and its terrorist forces?” he asked, warning Hezbollah not to “think it is more powerful than it is.”

Hezbollah leader Hassan Nasrallah hit back. “We don’t accept such a language,” he said in a televised speech. “We do not accept your accusation of treason. We reject and condemn this condescending behavior.”

Nasrallah said his group welcomed the French initiative to help parties to form a new government, but Macron should not behave as though he were the Lebanese head of state.

The leader of the other main Shi’ite party, Amal, also rejected Macron’s criticism. Nabil Berri, who has been speaker of the Lebanese parliament since 1992, said in a statement that Amal, “while respecting the role played by French President Macron, is surprised by the comments he has made, in particular about the accusations and our responsibility.”

Despite his evident frustration, Macron said he will not give up trying to help.

“I say to the Lebanese people that France will not abandon it,” he declared, but without saying how he planned to move ahead.

Political scientist Antoine Basbous, director of the Observatory of Arab countries (OPA) in Paris, in an earlier television interview said he was not optimistic about Macron’s chances of helping Lebanon, citing the Hezbollah factor.

“Hezbollah head Hassan Nasrallah obeys Iranian supreme leader Ali Khamenei,” he said. “The words of a Cartesian French president, reasoning in terms of the rule of law, do not stand up to the messianic vision of Hezbollah and the Islamic revolution in Iran.”

The fact Hezbollah receives its orders from Tehran, Basbous said, “will constitute the real obstacle for President Macron because [Nasrallah] is not – unlike the other actors in this crisis – desiring to rebuild rule of law that meets democratic standards.”

The European Union has designated Hezbollah’s military arm as a terrorist organization since 2013. The United States and several other Western nations make no distinction between purported political and military wings, designating the organization in its entirety as a terrorist group.

Hezbollah’s existence as an armed militia is in violation of key U.N. Security Council resolutions. Despite that, it has had lawmakers in parliament and ministers in the national cabinet for years.

By longstanding agreement, Lebanon’s president must be a Maronite Christian, the prime minister a Sunni Muslim, and the parliament speaker a Shi'ite Muslim, representing the three biggest groups in the country.