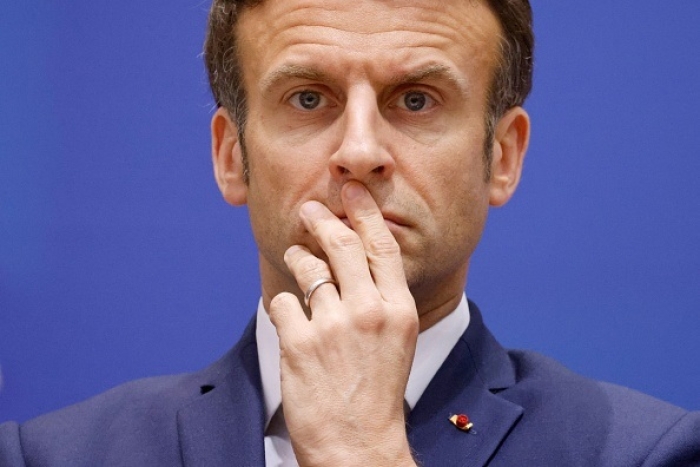 French President Emmanuel Macron at an E.U. summit in Brussels in March. (Photo by Ludovic Marin/AFP via Getty Images)

Paris (CNSNews.com) – France is holding to its position that it will take at least 10-15 years for Ukraine to join the European Union, despite Kyiv’s hopes that in the light of the Russian invasion it will be welcomed into the bloc much more quickly than that.

“We have to be honest,” Clément Beaune, the minister for Europe affairs in the new French government, said in a radio interview early this week. “If you say Ukraine is going to join the E.U. in six months, or a year or two, you’re lying.”

Ihor Zhovkva, the deputy head of the Ukrainian presidency, said later that the application for membership “must be processed as quickly as possible, as the country cannot wait years.”

Among the many hurdles to be overcome for a country to join the E.U. is the need for the unanimous support of the existing 27 member-states.

While Ukraine has strong supporters, Hungary could pose a particular problem, as Prime Minister Viktor Orban is seen as relatively sympathetic towards Moscow.

Beaune’s words reinforced what French President Emmanuel Macron told the European Parliament in Strasbourg in a speech early this month.

“Now, the war in Ukraine and the legitimate aspirations of Ukrainians, like those of Georgia and Moldova, who want to also join the E.U., mean that we have to rethink our geography and the organization of our continent,” he said.

Macron proposed the creation of a “European political community” which he said would make the integration of Ukraine, short of membership, easier and faster.

He said this community “should be built in parallel with a procedure for joining the European Union, which would take decades.”

Macron’s proposed framework would allow Ukraine, Georgia, Moldova, as well as countries in the Balkans that are already candidates for membership – North Macedonia, Montenegro, Albania, and Serbia – become part of a “European political community” more quickly.

He also mentioned in this context “those who have left the E.U.,” a reference to Britain, which withdrew from the bloc in 2020.

According to Florent Parmentier, associate researcher at the Center for Geopolitics at the HEC business school in Paris, the war in Ukraine itself will make it difficult to speed up Kyiv’s E.U. application.

“The most plausible scenario is unfortunately that of a war that will last, without a real winner,” he said. With Ukraine needing to be rebuilt, he said, the E.U. would “have to put its hands in its pocket.”

Parmentier said there was no indication that member-states viewed as more “frugal” would be willing to do so. He listed some of these as the Netherlands, Sweden, Denmark, Austria, and Germany.

Whether members like Spain, Italy, and Portugal would be interested in Ukraine joining the E.U. “under these conditions” was also not certain either, he added.

Austria’s foreign minister warned in April that Ukraine joining the E.U. “would weaken the bloc.”

On the other hand, leaders in Bulgaria, the Czech Republic, Poland, Slovakia, Slovenia, and the Baltic states – all countries that were under Soviet domination during the Cold War – have called on the E.U. to support and speed up Ukraine’s application.

During a visit to Kyiv in April, European Commission president Ursula von der Leyen handed Zelensky a questionnaire of motivations for a country aspiring to be candidate.

Becoming a member of the E.U. is generally a lengthy and difficult process. Poland and Hungary joined in 2004 after a 10-year candidacy. It took Croatia ten years before it joined in 2013 and Romania and Bulgaria 12 years before they were admitted in 2007.

North Macedonia has been a candidate since 2004, Montenegro since 2008, and Albania and Serbia since 2009.

Turkey has been seeking membership for decades, was officially declared a candidate in 1999, and formal negotiations have been underway since 2005. Its candidacy has been dogged by concerns over a poor human rights records, military intervention in Syria, and the dispute over Turkish-backed Northern Cyprus, among other issues.