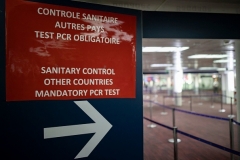 Paris (CNSNews.com) – The French government is re-imposing entry restrictions from the end of this month for people traveling from the United Kingdom, due to concerns about a COVID-19 variant that has been spreading there.

Anyone entering France from Britain, by air, rail or car through the Channel tunnel, will be obliged to isolate for ten days, government spokesman Gabriel Attal announced. Police will carry out spot checks on the addresses given on arrival, and fines of $1,830 will be issued for non-compliance.

In addition, travelers will have to present a negative COVID-19 test (PCR, or polymerase chain reaction test) result less than 36 hours old, or a negative PCR less than 72 hours old if accompanied by an antigen test less than 24 hours old.

The requirements for those coming from Britain will apply to all French nationals and residents as well as foreigners.

Attal said the government took the decision because of concerns about progression in Britain of the COVID-19 variant first detected in India.

The German government has placed similar restrictions on travelers from Britain.

Britain will be added to a list of 16 countries already subject to compulsory isolation on arrival in France, including India, Turkey and Brazil.

The “Indian” variant is spreading in Britain despite the fact 56.5 percent of Britons have already had at least one dose of a COVID-19 vaccination (as of May 25), compared to 35.1 percent in France, according to data from Our World in Data.

Epidemiologist Dominique Costagliola of the French National Institute of Health and Medical Research expressed concern about people who have not had the required two doses of the vaccine, as variants like the one first detected in India are more transmissible.

“We need to get to collective immunity to be safer,” she said. “As we are not yet in this situation, we need to keep barrier measures and to get [to a total of] under 5,000 cases of COVID-19 to limit risks of getting infected.”

The latest data published by Santé Publique France on Wednesday showed that over the past 24 hours, 146 COVID-19 deaths had been recorded in hospital, but none in nursing homes in France.

Non-E.U. countries of origin of people arriving in France will be divided into three “traffic light” categories.

Non-citizens from “red” countries – such as India and Brazil – will not be able to enter at all, unless they have a compelling reason to do so – and if they do, they will have to quarantine and show a negative PCR test result.

According to Clément Beaune, secretary of state for European affairs, France will expect reciprocity if the E.U.’s borders are reopened to American visitors for the summer season.

A green light to open borders for non-essential travel will be based on three criteria, he said – a “solid health situation” in the countries in question, “reliable proof of vaccination or testing,” and “reciprocity.”

The European Commission agreed in May on an E.U.-wide digital COVID-19 certificate, which must be used by the 27 E.U. member-states from July.

The E.U. health “passport” was initially suggested by Greece, and promoted by countries heavily dependent on tourism, in the hope it would be in place by the summer.

The French government decided that the new French health pass will not be compulsory nor necessary for all daily life activities such as in the workplace, at public facilities, or at supermarkets, restaurants or cinemas.

But it will be required at events hosting more than 1,000 people, such as in large performance halls, at sporting or cultural events, festivals, fairs and exhibitions.

A survey published by daily Le Parisien in early this year showed that  62 percent of respondents were in favor of compulsory vaccination for people in France wishing to fly abroad. The French are eager to be able to travel abroad this summer.