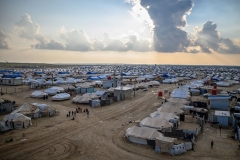 The Al-Hol camp in northeastern Syria, where captured ISIS jihadists and family members are held along with other people displaced by the fighting. (Photo by Bulent Kilic/AFP/Getty Images)

Paris (CNSNews.com) – European and other countries with citizens who joined ISIS and are being held in camps in Syria should repatriate them and their families, Secretary of State Antony Blinken reiterated this week.

His remarks, during a meeting in Rome of the Global Coalition to Defeat ISIS, were directed in particular at France, which accounts for the highest number of people held in the camps, many of them children.

“The continued detention of former Islamic State fighters in Iraqi and Syrian camps is untenable, and most of them must be repatriated to their home countries,” Blinken said, adding that the situation could not “persist indefinitely.”

He said it was also important that those who fought with the terrorist group be put on trial in their home countries, rather than in Syria or Iraq.

“The United States continues to urge countries, including coalition partners, to repatriate, rehabilitate and, where applicable, prosecute its citizens.”

Blinken said there were still 10,000 ISIS fighters in Syria, where they are being detained by the U.S.-allied Syrian Democratic Forces (SDF).

He acknowledged that if a country does not find a way to prosecute citizens who joined ISIS they could be freed, which would be an additional burden for the security services.

Blinken praised countries that have repatriated citizens from Syria and Iraq, singling out Kazakhstan and other Central Asian republics in particular, and well as countries in the Balkans.

“And Italy, of course, has distinguished itself as one of the few Western European countries willing to return nationals from the region,” he said, adding that Finland had also repatriated multiple families.

A study published last week by experts at the Brussels-based think tank Egmont–Royal Institute for International Relations found that between 610 and 680 children of European jihadists are currently being held in the Roj and Al-Hol camps in northeastern Syria.

The children are being kept with their mothers in the two camps, where many former ISIS fighters have been held since the collapse of the group’s so-called caliphate in 2019.

The study, by counter-terror and counter-radicalization experts Thomas Renard and Rik Coolsaet, was based on data from governments, experts and NGOs active on the ground.

It found that France accounted for the largest number, with about 150-200 adult French citizens in the camps, together with 200-250 children.

Other countries with sizeable numbers of citizens among the detainees are Germany, the Netherlands, Sweden, Belgium, and Britain.

Renard said in an interview French President Emmanuel Macron had considered bringing back at least the children of ISIS fighters, but appeared to have given up that option, concerned about the negative impact the move could have on his re-election chances in 2022.

He predicted that Macron could find it a little more difficult to refuse doing so, now that the request was coming from the Biden administration.

“When Donald Trump was president, he asked Europeans and French to bring back home their citizens, former ISIS fighters, from their prisons in Syria and Iraq,” he recalled. “But because relations with the U.S. were not very good it was easier not to comply.”

As France, and Europe in general, has better relations with the U.S. under President Biden, Renard said, “it might be a little more difficult for France not to bring back its citizens.”

France may also find it awkward to maintain a rigid stance, now that other countries are repatriating their citizens, he added.

Renard said the children at the camps were suffering both because of the choices of their parents and as a result of the inaction of governments.

Noting that most of the children are aged under 12, with 60-70 percent of them under five, he said, “we must dismiss the argument that these children would represent ‘time bombs’ once back on European soil.”

In a report last March, Human Rights Watch said nearly 43,000 men, women and children of foreign origin linked to ISIS remain in camps in northeastern Syria, two years after the fall of the “caliphate.”

It said they included citizens of at least 58 countries, including Russia and China.

“Men, women, and children from around the world are entering a third year of unlawful detention in life-threatening conditions in northeast Syria while their governments look the other way,” said the report.

“Governments should be helping to fairly prosecute detainees suspected of serious crimes and free everyone else, not helping to create another Guantanamo,” HRW argued.

The U.S. Justice Department announced last fall that all 27 U.S. citizens who were known to have traveled to Syria or Iraq to join ISIS were back on U.S. soil. It said 10 had been charged or convicted of terrorism-related offenses, while most of the others were minors.