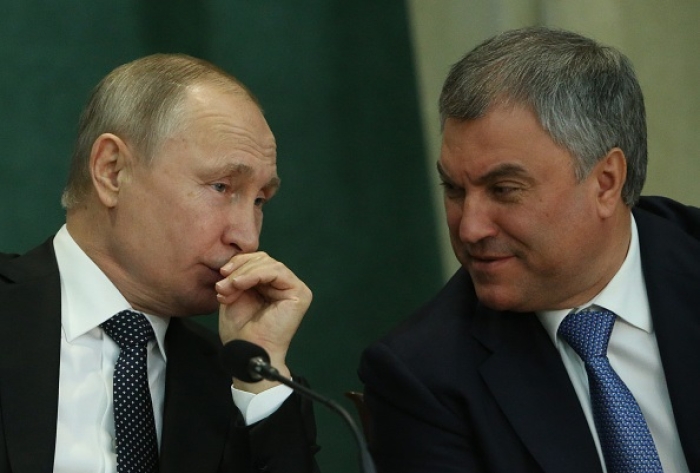 Moscow (CNSNews.com) – A senior Russian lawmaker has called upon the Kremlin to expropriate the property of Western companies in the country in response to the Biden administration’s proposal to transfer frozen Russian assets to Ukraine.

Vyacheslav Volodin, speaker of the State Duma, Russia’s lower house of parliament, accused the U.S. of “resorting to pure theft” and vowed that any seizure of Russian assets would “boomerang” against Washington.

“In this regard, it is right to offer a symmetrical response by confiscating the assets of businesses located in the Russian Federation, whose owners are from unfriendly countries where such decisions are made,” he wrote in a post on Telegram. “And the proceeds from the sales should be directed to the development of our country.”

Volodin claimed that Western companies had up to $500 billion worth of assets based in Russia. “We have something we can answer with,” he said.

Delyagin told Komsomolskaya Pravda that the government should also institute a ban on paying back any debt to legal entities and individuals from countries that have imposed sanctions against Russia.

“If you want to receive money, write an application to the government commission,” he said. “Maybe you will be allowed in some special cases. Of course, this does not apply to small private debts between citizens.”

Volodin’s warnings come after the Biden administration asked Congress to approve a $33 billion aid package for Kyiv, which includes provisions that would “streamline the process for seizure of [Russian] oligarch assets, expand the assets subject to seizure, and enable the proceeds to flow to Ukraine.” The European Union and Canada are considering similar legislation.

Early signs on Capitol Hill indicate strong bipartisan support for the initiative. Even before the administration publicly made its request, the House on Wednesday voted 417-8 for a nonbinding bill that would grant Biden the power to liquidate the assets of sanctioned Russian oligarchs and transfer the resulting funds to Ukraine.

Kremlin spokesman Dmitry Peskov denounced the proposal as a “very dangerous precedent” and “a blatant distortion of any legal norms.”

“This is nothing more than just the expropriation of private property and an attempt to pseudo-legitimize this expropriation,” he told reporters on Friday.

The Biden administration may also be exploring an even more politically explosive option – handing over hundreds of billions of dollars in frozen Russian central bank reserves to Kyiv.

During testimony before the House Foreign Affairs Committee on Thursday, Secretary of State Antony Blinken said State Department lawyers were looking at “what authorities would be needed, potentially, to seize those assets – but not only to seize them, but to use them” for the benefit of Ukraine.

Following the Kremlin’s decision to send the armed forces into Ukraine in late February, the central banks of the U.S. and its allies in Europe and Asia froze more than half of Russia's $640 billion financial reserves. President Vladimir Putin compared the move to ‘a declaration of war’ while many other senior Russian officials denounced it as “theft.”

Moscow has so far held off from pursuing any meaningful retaliation against international sanctions, however. Most countermeasures have focused on stabilizing the Russian economy rather than on hitting back at Western governments or companies.

At the same time, the government has prepared draft legislation that would enable it to nationalize the property of Western citizens and companies in Russia.

In early March, the Kremlin introduced a bill that proposed introducing “external administration” of foreign companies which announced their intention to leave the Russian market. Under the procedure outlined in the draft law, the Russian government would have the power to hand over the foreign companies’ assets to a new, domestic management.

According to the Russian newspaper Izvestia, a list of 59 foreign companies whose assets could be nationalized was sent to the Prosecutor General’s Office. The list included major global brands such as Apple, McDonald’s, Microsoft, IBM, IKEA, Toyota, and H&M.

However, Izvestia reported last month that work on the bill was temporarily on hold, citing three sources within the Russian government.

Another nationalization draft law was submitted to the State Duma last month by deputies from the ruling United Russia party. The bill would enable Moscow to seize assets “by foreign states or persons associated with them that commit unfriendly actions against the Russian Federation,” without compensation.