Skip to main content
The U.S. Senate has voted 52-48 to confirm Judge Amy Coney Barrett to the Supreme Court. Sen. Susan Collins (Maine) was the lone GOP “no” vote 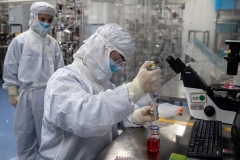 Sinovac Biotech in Beijing is one of several Chinese institutions in the race to develop a vaccine for COVID-19. (Photo by NICOLAS ASFOURI/AFP via Getty Images)

Moscow (CNSNews.com) – China and Russia are partnering to develop a vaccine against the novel coronavirus, amid efforts by the two countries to assert themselves as leaders in the global vaccine race.

The news comes shortly after the unveiling of a Russian vaccine drew widespread skepticism, with experts voicing concern that Russian authorities were approving a drug based on limited data and insufficient testing.

Zhong Nanshan, China’s top infectious disease specialist, announced early this week that China and Russia plan on conducting joint clinical trials for a vaccine against COVID-19, a move which he described as “a manifestation of the friendship between the two countries.”

“There is much for China and Russia to learn from each other,” he said. “Russia’s mortality rate from COVID-19 is very low, while China has unique experience in fighting the pandemic, especially when it comes to using traditional Chinese medicine for treating the disease.”

Zhong did not specify what potential vaccine the two countries would be testing together, or say when and where the trials will be conducted.

The growing cooperation between Moscow and Beijing comes as both governments race to be among the first countries to find a vaccine for the virus that emerged in Wuhan, China late last year.

On August 11, President Vladimir Putin announced that Russia had registered the world’s first vaccine against COVID-19, named Sputnik V in honor of the 1957 Soviet satellite that ushered in the Space Age. The vaccine was developed by the Gamaleya Research Institute in Moscow, which has previously developed vaccines against Ebola and Middle East Respiratory Syndrome.

The Russian Direct Investment Fund, which helped finance the vaccine’s development, reported that it has already received preorders for one billion doses from 20 countries. It said it plans on producing 200 million doses of the vaccine by the end of 2020.

The Gamaleya Institute’s new vaccine has elicited widespread skepticism at home and abroad, however.

In a survey of more than 3,000 Russian healthcare professionals conducted by the RBC news website, only a quarter of respondents said they were willing to be inoculated, while 52 percent said they were not. The primary concern among doctors, the survey found, was lack of data about the vaccine’s effectiveness.

Dr. Anthony Fauci, director of the National Institute for Allergy and Infectious Diseases (NIAID), said he “seriously doubts” that Sputnik V is ready for widespread use. German Health Minister Jens Spahn warned that prematurely releasing a vaccine would be “dangerous.”

The World Health Organization does not currently include Sputnik V on its list of vaccine candidates that have reached Phase III trials.

(The other two are those being developed by Oxford University in collaboration with AstraZeneca, and by Moderna Inc. in the U.S., in conjunction with NIAID.)

On Tuesday, Chinese state-owned pharmaceutical company Sinopharm announced that its vaccine would be ready to go onto the market before the end of year, and that two shots of the vaccine will cost less than $144.

Azar also said China “has not been transparent, has not been collaborative” in its handling of the pandemic.