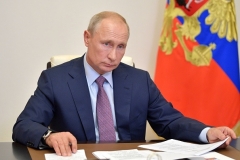 Moscow (CNSNews.com) – Russia is planning to establish a naval base in Sudan, its first military base in Africa since the end of the Cold War.

The Kremlin announced that Sudan has granted Russia permission to build a naval logistics center on its 330-mile-long Red Sea coastline, hosting up to 300 military personnel and four naval ships – including potentially nuclear-powered submarines or missile cruisers.

Russia will have a 25-year lease on the base, to be located near Port Sudan, with the option of renewing it for another decade.

Russian President Vladimir Putin signed off on the deal on Monday.

Senator Alexei Pushkov, a member of the Foreign Affairs Committee in the upper house, the Federation Council, told state television that the base would provide Moscow with “control over a strategic waterway.”

“Sudan is the key to the Bab al-Mandab Strait, the Red Sea, and the Suez Canal,” he said. “A large volume of energy resources goes through this exact route. Oil from the Persian Gulf passes by Sudan [en route to the Suez Canal and the Mediterranean].”

Russia has been attempting to establish a naval base in the Horn of Africa for years. It previously reached out to Somalia and Eritrea about the possibility of setting up a base, but neither has yet greenlighted a deal.

Sudan, an oil- and mineral-rich country, was far more receptive. The ousted former president, Omar al-Bashir, cultivated ties with Russia in hopes of acquiring a powerful patron capable of shielding his regime from the United States. During a 2017 visit to Moscow, Bashir asked Putin to help modernize the Sudanese armed forces and floated the possibility of a Russian military base in Sudan. A year later, Khartoum awarded a U.S.-sanctioned Russian company with preferential access to Sudan’s gold mines.

Bashir was overthrown in 2019, but Russia has maintained a good relationship with his successor, the transitional head of state Gen. Abdel Fattah al-Burhan.

Moscow was an influential patron of many African governments and revolutionary movements during the Cold War, but almost completely withdrew from the continent following the collapse of the Soviet Union in 1991. Military bases were abandoned, and former Soviet allies began pivoting toward the U.S., and then later, to China.

Nearly three decades later, Russia is starting to mount a comeback. It has emerged as the largest arms supplier to Africa in recent years, accounting for 35 percent of all weapons exports to the continent, according to Stockholm International Peace Research Institute data. The next two biggest suppliers, China and the U.S., accounted for only 17 percent and 9.6 percent respectively.

Moscow has also signed military cooperation agreements with more than 20 African countries since 2015. Common provisions in the agreements include joint training exercises, military equipment transfers, and cooperation on counter-terrorism.

Russia is also understood to be keen to set up bases in Egypt, Madagascar, Mozambique, and the Central African Republic (CAR).

It has reportedly deployed military advisors and mercenaries to several African nations, most notably to the CAR, where the government is battling a widespread insurgency. Last month, the Russian Defense Ministry established a representative office in the CAR, and donated ten armored vehicles to the country’s military.

Moscow has also begun to make economic inroads with Africa, although its trade with the continent remains far below that of the U.S., China, and the European Union.