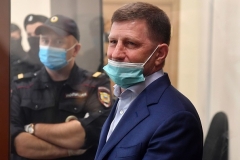 The governor of Russia’s Khabarovsk region, Sergei Furgal, at a court hearing in Moscow on Friday. He has been charged with organizing ‘the murders and the attempted murder of a number of entrepreneurs’ in 2004 and 2005. (Photo by Dimitar Dikloff/AFP via Getty Images)

Moscow (CNSNews.com) – Tens of thousands of Russians in the country’s far east have rallied to protest the arrest of a popular opposition governor, and the leader of his party has called for a “revolution.”

Federal authorities arrested the governor of Khabarovsk Territory, Sergei Furgal, late last week on charges that he ordered multiple killings as a businessman 15 years ago.

Furgal, a member of the ultra-nationalist Liberal Democratic Party of Russia (LDPR), pleaded not guilty to the charges. His supporters say the allegations are politically motivated.

News of the arrest set off mass protests in territory’s capital, also called Khabarovsk, with up to 35,000 people taking to the streets on Saturday, the Kommersant newspaper reported. Demonstrations continued on Sunday and Monday, with hundreds of people rallying to demand the release of the man dubbed “the people’s governor.”

Protestors singled out President Vladimir Putin for blame, with many in the crowd chanting slogans such as “Putin, step down!” and “Putin is a thief!”

More than 50,000 people have signed a petition supporting Furgal as of Monday.

The protests come at a time when Putin’s popularity is declining amid the coronavirus pandemic and a stagnant economy. He registered a 59 percent approval rating in April, the lowest figure of his two-decade rule, according to independent polling agency Levada Center.

Opposition to Putin has traditionally been concentrated in Moscow and St. Petersburg, Russia’s largest and most affluent cities. Industrial regions such as Khabarovsk Territory, on the other hand, have long been reliable bastions of working-class support for the Kremlin.

That, however, is starting to change.

In recent years Putin’s support in Khabarovsk has plummeted due to frustrations over the economy. Last November, Kommersant reported that a closed poll by a government-funded polling agency gave Putin a 48 percent confidence rating in Khabarovsk, the lowest of any territory in Russia.

In a gubernatorial race in 2018, Furgal defeated the incumbent, a member of the pro-Kremlin United Russia party, in a landslide victory, earning nearly 70 percent of the vote to his opponent’s 28 percent.

The Kremlin then suffered another defeat in Khabarovsk in regional elections last November, when United Russia did not capture a single seat in the Khabarovsk City Duma and won only two seats in the regional parliament.

Furgal’s LDPR, on the other hand, secured a majority of seats in both legislative bodies.

Despite limited coverage by state media, the protests in Khabarovsk have attracted national attention, with numerous opposition figures across the spectrum voicing support.

Alexei Navalny, a prominent liberal opposition campaigner and blogger, argued that while Furgal may prove to be guilty of the crimes alleged, his arrest was retribution for him “publicly humiliating” the Kremlin during the elections of 2018 and 2019.

In an impassioned speech in the State Duma, the lower house of parliament, Zhirinovsky threatened mass resignations by LDPR lawmakers if Furgal was not released – and even raised the prospect of revolution.

“The time will come when we will quarantine you and your authorities!” he said. “It’s us who will have a revolution, and not the one the Bolsheviks or [former president Boris] Yeltsin screwed up. A new generation has risen that won’t forgive you for anything and will punish all of you.”