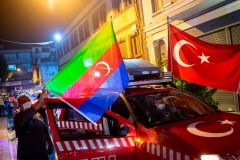 Moscow (CNSNews.com) – Russia’s foreign intelligence agency on Wednesday warned that Turkish-based Syrian fighters deploying to the Caucasus could turn the region into a “new springboard for international terrorist organizations,” as Moscow continues to express concern about Turkey’s intervention in fresh fighting between longstanding rivals Azerbaijan and Armenia.

Fighting erupted in the region on September 27, with the two governments accusing each other of launching artillery fire across the border. Azerbaijan and Armenia have been tussling over Nagorno-Karabakh since 1988, when the region’s ethnic Armenian majority voted to secede from Azerbaijan. A ceasefire was declared in 1994 after a war that killed 30,000 people and displaced hundreds of thousands, but low intensity skirmishes occur to this day.

Unlike previous flare ups, however, Azerbaijan is now receiving considerable political and military backing from Turkey, with whom it has strong ethnic, cultural and religious ties. In recent years Ankara has provided Baku with advanced drones and helped to train Azerbaijani officers. In August, the two countries held joint military exercises, and Turkish President Recep Tayyip Erdogan has vowed to back Azerbaijan “in every way possible” until Nagorno-Karabakh is “liberated from occupation.”

Turkey is now accused of deploying fighters from northern Syria – an area controlled by Ankara-backed rebel groups – to Azerbaijan. According to the U.K.-based Syrian Observatory for Human Rights, more than 1,200 Syrian National Army (SNA) fighters have arrived in Azerbaijan, via Turkey. The United Nations last month accused the SNA of committing war crimes against Christians, Kurds, and other minorities in Syria.

Turkey and Azerbaijan have both denied the allegations about reinforcements from Syria.

On Wednesday, Sergei Naryshkin, the head of Russia’s foreign intelligence service (SVR), warned that the influx of Syrian fighters threatened to transform the Caucasus into a “new springboard for international terrorist organizations.”

“According to information available to the SVR, mercenaries from international terrorist organizations fighting in the Middle East – in particular, Jabhat al-Nusra, Firkat Hamza, Sultan Murad, as well as extremist Kurdish groups – are actively drawing into the conflict zone,” he said. “We are talking about hundreds and even thousands of radicals hoping to make money in the new Karabakh war.”

Turkey’s foray into the conflict has put it at odds with Russia, a traditional ally of Armenia and partner with it in the Collective Security Treaty Organization (CSTO), a Russian-led military alliance comprising several former Soviet republics. Armenia is also home to a major Russian military base, housing more than 3,000 troops.

At the same time, Russia has maintained friendly relations with Azerbaijan – also a former Soviet republic – seeking to serve as the primary mediator between the warring neighbors.

Shortly after the resumption of hostilities late last month, the Kremlin accused Turkey of “adding fuel to the flames” and urged it to support a resumption of a peace process.

“It is obvious that Turkey is pushing Azerbaijan to seek a military solution,” he added. “Turkey should be reminded that it lives in a glass house and should not be throwing stones.”

Although Russia and Turkey have expanded military and economic cooperation in recent years, Ankara’s membership in NATO remains a source of distrust for Moscow.

“Objectively, Erdogan needs a protracted conflict in Nagorno-Karabakh so that an international military group with Turkey’s participation is introduced, which will pave the way for a Turkish military base with access to the Caspian Sea,” he told Russia’s NSN news website. (Azerbaijan borders both Russian territory and the Caspian Sea.)

“The Caspian is Russia’s underbelly, the only sea with no NATO naval presence yet,” Sherin said. “But if Turkey establishes a military base in Azerbaijan, then [NATO warships] will appear, and the ring around Russia will close.”

Yet despite Moscow’s concern about Turkey’s military support for Azerbaijan, the Kremlin has remained reluctant to offer military support to Armenia. President Vladimir Putin told a state-run broadcaster on Wednesday that Russia had no intention of sending troops to aid Armenian forces fighting in Nagorno-Karabakh. CSTO mutual defense obligations did not apply to the conflict, he said, since hostilities “are not taking place on Armenian territory.”