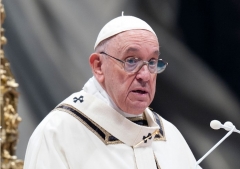 (CNSNews.com) - Pope Francis spoke to workers from the Italian government's tax collection agency on Monday and told them that taxation “must favor the redistribution of wealth.”

The Italian text of the pope’s speech has been posted on the Vatican website and was translated into English for this story using Google Translate.

“As is often said, in fact, the taxman is seen as a ‘putting their hands in their pockets’ to people,” said the pope. “In reality, taxation is a sign of legality and justice. It must favor the redistribution of wealth, protecting the dignity of the poor and the least, who always risk being crushed by the powerful.

“The tax, when it is right, is a function of the common good,” he said.

Here is the full text of the pope’s speech:

ADDRESS OF THE HOLY FATHER FRANCIS

TO THE DELEGATION OF THE REVENUE AGENCY

"I thank the Director for his words of greeting. I am happy to welcome you for a moment of reflection on a highly topical issue, important for the common good. Through you, I greet all the workers of the Revenue Agency at central, regional and provincial level. I would like to share with you some teachings of the Gospel that can help you in your work; and I will take a cue from the guiding principles of your agency: legality, impartiality and transparency.

"First, however, we must remember that the Bible does not lack references to the theme of taxes. It has been part of daily life since ancient times. Every empire that has ruled the Holy Land, and even the kings of Israel, have established systems for paying taxes.

"The best known situation is that of the taxes that the Romans demanded at the time of Jesus. They did so through the "tax collectors", who collected the taxes in exchange for a large fee. And among these there was Zacchaeus (cf. Lk 19: 1-10), from Jericho, whom Jesus went to visit and converted, scandalizing everyone. Matthew was also a publican, whom Jesus called just as he was at the tax office; Matthew immediately followed him, and became a disciple, apostle and evangelist (cf. Mt 9: 9-13). Caravaggio immortalized the moment when Jesus stretches out his hand to him and calls him: clinging to the money, he was, like this [he makes the gesture]. And here is what you [the Director] said at the beginning about miserando et eligendo. He looks at him with mercy - miserable - and chooses him - eligendo. He looks at him miserando et eligendo. From that moment, Matthew's life is no longer the same: it is illuminated and warmed by the presence of Christ. And sometimes we, when we pray to the Lord to make a decision, ask for the grace to enlighten us - and this must always be done - but we don't always ask for the other grace: to warm our hearts. Because a good decision needs both things: a clear mind and a warm heart, warmed by love. Perhaps Matthew will have continued to use and manage his own goods, and perhaps also those of others, but certainly with another logic: that of serving the needy and sharing with his brothers and sisters, as the Master taught him.

"The Bible does not demonize money, but invites us to make the right use of it, not to be enslaved by it, not to idolize it. And it's not easy to use money well, it's not easy. In this regard, the practice of paying tithing is little known but very interesting. This is a custom common to several ancient societies, which provides for the payment to the sovereign of a tenth of the fruits of the earth or livestock by farmers and ranchers. The Old Testament, while maintaining this practice, gives it another meaning. The tithe served in fact to maintain the members of the tribe of Levi (cf. Lv 27,30-33), who, unlike all the other tribes of Israel, had not received a part of the promised land as an inheritance. The task of the Levites was to serve in the temple of the Lord and to remind everyone that Israel is the people of those who have been saved by God. taxed. From this point of view, the tithe for the Levites served to make two truths mature in the conscience of the people: that of not being self-sufficient, because salvation comes from God; that of being responsible for each other, starting with those most in need.

"In this context, the principles of legality, impartiality and transparency become a precious compass.

"Legality. Today, as in Bible times, tax collectors risk being perceived in society as an enemy to beware of. And unfortunately a certain culture of suspicion can extend to those who are in charge of enforcing the laws. Yet this is a fundamental task, because the law protects everyone. It is a guarantee of equality. The laws make it possible to maintain a principle of fairness where the logic of interests generates inequalities. Legality in the tax field is a way to balance social relations, subtracting forces from corruption, injustice and inequality. But this requires some training and cultural change. As is often said, in fact, the taxman is seen as a "putting their hands in their pockets" to people. In reality, taxation is a sign of legality and justice. It must favor the redistribution of wealth, protecting the dignity of the poor and the least, who always risk being crushed by the powerful. The tax, when it is right, is a function of the common good. We work to increase the culture of the common good - this is important! -, so that the universal destination of goods, which is the primary purpose of goods, is taken seriously: the universal destination, which the social doctrine of the Church continues to teach even today, inheriting it from Scripture and from the Fathers of the Church. You have listed among those things that the taxman supports, doctors. Please continue with the free healthcare system, please! And this comes from the taxman. Defend him. Because we will not have to fall into a paid healthcare system, where the poor have no right to anything. One of the beautiful things that Italy has is this: please keep it.

"Second: impartiality. Your work appears ungrateful in the eyes of a society that focuses on private property as an absolute and fails to subordinate it to the style of communion and sharing for the good of all. However, alongside the cases of tax evasion, illegal payments, widespread illegality, you can tell the honesty of many people who do not shirk their duty, who pay their dues, thus contributing to the common good. The simple righteousness of so many taxpayers responds to the plague of tax evasion, and this is a model of social justice. The impartiality of your work affirms that there are no better citizens than others on the basis of their social belonging, but that everyone has the good faith of being loyal builders of society. There is a "craftsmanship of the common good" that should be narrated, because honest consciences are the true wealth of society. Speaking of impartiality, St. Paul's indication to the Christians of Rome is always timely: "Give back to each one what is due to him: to whom taxes are owed, given taxes; to whom the tax, the tax; to whom fear, fear; to whom respect, respect "(13,7). It is not a question of legitimizing any power, but of helping each one to "do good before all men" (Rom 12:17).

"Third: transparency. The Gospel episode of Zacchaeus recalls the conversion of a man who not only recognizes his sin of having defrauded poor people, but above all understands that the logic of accumulating for oneself has isolated him from others. For this it returns and shares. He was touched in his heart by the gratuitous love of Jesus who wanted to go right to his home. And then he openly declares what he will do: he will give half of what he possesses to the poor and return four times as much to those who have robbed. Returns with generous interest! In this way he gives transparency to the money that passes through his hands. Transparent money: this is the goal. The taxman is often perceived in a negative way if you do not understand where and how public money is spent. There is a risk of fueling suspicion and discontent. Whoever manages everyone's wealth has a grave responsibility not to get rich.

"In 1948, Don Primo Mazzolari wrote to the Catholic politicians elected in Parliament as follows: ‘Much will be forgiven to those who, not having been able to provide for all the inconveniences of others, will be careful not to provide for their own. Reducing the sickness of others is not always possible: do not withdraw for us on misery, it is always possible. It is the first duty, the first Christian witness. Faced with a common tribulation, clean hands seem a meager presentation: but the poor do not think so. The poor measure from it, not our honesty, but our solidarity, which is then the measure of our love.’ Transparency in the management of money, which comes from the sacrifices of many workers, reveals the freedom of mind and trains people to be more motivated to pay taxes, especially if the tax collection helps to overcome inequalities, to make investments so that there is more work, to guarantee good health and education for all, to create infrastructures that facilitate social life and the economy.

"Dear brothers and sisters, may Saint Matthew guard you and support your commitment on the path of legality, impartiality and transparency. It is not easy, but teach us this: work because we all understand this. These things are important. I too accompany you with my prayer and my blessing and also my closeness. And I ask you to please pray for me. Thank you."