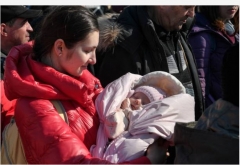 Polish women were fleeing into Ukraine in 2021—not out of it—in order to abort their unborn children, according to an Oct. 19, 2021 report posted by “Emerging Europe.”

In Poland, unborn babies are generally protected by law. Ukraine has abortion on demand up to 24 weeks and loose restrictions on abortion after that.

“A near-total ban on abortion in Poland has led to an increase in the number of Poles heading across the border to Ukraine.

“For several years, private abortion clinics in western Ukraine have seen a steady stream of clients from Poland.

“Relatively liberal abortion laws – the procedure can be carried out on demand up to 24 weeks into a pregnancy – in comparison with recently tightened legislation in Poland mean that the number of clients is set to increase.

“Since 1993, Poland has had some of the strictest abortion laws in Europe. That year, legislation was passed which outlawed abortion except in three specific cases: if the pregnancy threatens the life of the mother, if the pregnancy was the result of incest or rape, or if the fetus was found to have serious, incurable, irreversible defects. …

“While official statistics for the exact number of Polish women coming to Ukraine for abortions are impossible to find – private clinics keep this information confidential and Polish women do not declare abortion as their reason for travel when leaving the country – according to Hrushevskaya, Poles are undoubtedly a major demographic among visitors to reproductive clinics.”

On Nov. 15, 2020, the Tourism Review website had similarly published a story headlined “Abortion Tourism to Grow in Ukraine Due to Poland’s Ban.” It said:

“Ukraine’s abortion tourism may become widespread after one of its neighboring countries, Poland, tightened its laws against abortions, banning almost all terminations.

“Poland’s anti-abortion law, dating from 1993, is one of the harshest in all of Europe. However, on October 22, the Polish Constitutional Court placed even more restrictions on pregnancy terminations by prohibiting it also in cases in which fetal defects, diseases or abnormalities occur, which was the cause of 98% of abortions in the country.

“Now, terminations are only legal in Poland in cases of rape, incest or if the mother’s life is at risk.

“On the other hand, Ukraine allows voluntary termination between 12 and 24 weeks of pregnancy. Furthermore, its legislation allows this service to be provided to Polish citizens. While doctors cannot face legal retaliation for inducing such terminations in Ukraine, they could go to prison in Poland if they clandestinely terminated pregnancies.”