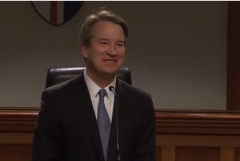 (CNSNews.com) - Judge Brett Kavanaugh, who was appointed to the U.S. Court of Appeals for the District of Columbia by President George W. Bush, accepted the assumption in a dissenting opinion he filed last October in the case of Garza v. Hargan that a teenage illegal alien caught at the border and put in detention has a right to an abortion in the United States.

At the same time, Kavanaugh conceded that “this case presents a new situation not yet directly confronted by the Supreme Court.”

Kavanaugh argued that in saying the illegal alien teen had a right to abortion in the United States he was accepting the government’s assumption regarding existing Supreme Court precedents.

Kavanaugh did say that the majority of the appeals court was mistaken in saying the illegal alien had “a right to immediate abortion on demand.” [Emphasis added.] He argued the government could delay the abortion while seeking to find the illegal alien a sponsor.

Kavanaugh wrote that “under Supreme Court precedent in analogous contexts, it is not an undue burden for the U.S. Government to transfer an unlawful immigrant minor to an immigration sponsor before she has an abortion, so long as the transfer is expeditious.”

In its own arguments in the case, the Trump administration did not take a position one way or the other on whether an illegal alien caught at the border has a right to an abortion in the United States. Instead, it was willing to assume this was the case rather than argue it.

But Kavanaugh’s opinion based on that same assumption contrasted sharply with the argument made by the states of Texas, Arkansas, Louisiana, Michigan, Missouri, Nebraska, Ohio, Oklahoma and South Carolina in an amicus brief presented to the court. Those states argued that Supreme Court precedent did not in fact recognize a right to abortion in the United States for an illegal alien caught entering the country—and that there was, in fact, no such right.

Judge Karen LeCraft Henderson, Kavanaugh’s colleague on the appeals court, also argued that an illegal alien caught entering the country did not have a constitutional right to have an abortion here.

“Does an alien minor who attempts to enter the United States eight weeks pregnant—and who is immediately apprehended and then in custody for 36 days between arriving and filing a federal suit—have a constitutional right to an elective abortion?” Henderson wrote in her dissenting opinion in the case of Garza v. Hargan.

“The government has inexplicably and wrongheadedly failed to take a position on that antecedent question,” wrote Henderson. “I say wrongheadedly because at least to me the answer is plainly—and easily—no. To conclude otherwise rewards lawlessness and erases the fundamental difference between citizenship and illegal presence in our country.”

In her opinion, Henderson summarized the facts of the case.

“In or about early July 2017, 17-year-old Jane Doe (J.D.) became pregnant,” Henderson wrote. “On or about September 7, 2017, she attempted to enter the United States illegally and unaccompanied. By J.D.’s own admission, authorities detained her ‘upon arrival.’”

“J.D. requested an abortion,” wrote Henderson. “The evidence before us is that it is an elective abortion: nothing indicates it is necessary to preserve J.D.’s health.”

The Office of Refugee Resettlement, the agency of the Department of Health and Human Services which is responsible for unaccompanied alien minors, would not allow her to obtain an abortion while she was in its custody—requiring her to wait until she was handed over to a sponsor.

She sued—claiming the U.S. government was denying her the right to an abortion under the U.S. Constitution.

The state of Texas--and the eight other states that joined in its amicus brief to the U.S Court of Appeals for the District of Columbia--disagreed. These states argued that Supreme Court precedents did not extend a right to abortion to an illegal alien apprehended at the border.

Indeed, these states argued that if the principle underlying this notion were excepted than the United States would have to extend other constitutionally protected rights to apprehended illegal aliens—such as the right to keep and bear arms, which is expressly recognized by the Second Amendment.

“In this case, the district court has entered a TRO [temporary restraining order] effectively declaring that the U.S. Constitution confers on unlawfully-present aliens the absolute right to an abortion on demand even when they have no ties to this country other than the fact of their arrest while attempting to cross the border unlawfully,” said Texas and the other eight states.

“As far as amici can ascertain, no court has ever before issued such a sweeping order—and with good reason,” these states said. “Under the district court’s reasoning, there will be no meaningful limit on the constitutional rights an unlawfully-present alien can invoke simply by attempting to enter this country.

“Such relief,” the states continued, “also contradicts longstanding Supreme Court precedent that full Fifth Amendment rights vest only in those aliens who ‘have come within the territory of the United States and developed substantial connections with this country.’ United States v. Verdugo-Urquidez, 494 U.S. 259, 271 (1990) (emphasis added).”

Texas and the other states then pointed out that federal courts have made clear that illegal aliens do not have an unqualified right to keep and bear arms in the United States.

“If the district court’s TRO stands, it will have far-reaching and dire consequences throughout constitutional law and undermine settled precedents,” said their amicus brief.

“Yet courts have consistently rejected the notion that unlawfully-present aliens with no substantial connections to this country are protected by the Second Amendment,” the states said in their amicus.

In her dissent on the appeals court, Judge Henderson argued that even though the government had failed to raise the underlying question of whether the Constitution granted this illegal alien a right to abortion, the court had legal authority to decide it—and must do so because of its importance.

“Granted, because of the government’s failure to take a position, we in theory have discretion not to decide the antecedent question,” wrote Henderson. “But in reality the ship has sailed: as a result of my colleagues’ decision, J.D. will soon be on her way to an abortion procedure she would not receive absent her invocation of the Fifth Amendment.

“If ever there were a case in which the public interest compels us to exercise our ‘independent power to identify and apply the proper construction of governing law’ irrespective of a party’s litigating position, this is it,” she said.

“The stakes, both in the short run and the long, could scarcely be higher,” she said.

Henderson said that the argument adopted by the majority of that court—to grant an illegal alien in detention a right to abortion—seemed to accept a principle that would extend to aliens the right to keep and bear arms and make contributions to U.S. political campaigns.

“Having discarded centuries of precedent and policy, the majority offers no limiting principle to constrain this Court or any other from following today’s decision to its logical end,” Henderson wrote. “If the Due Process Clause applies to J.D. with full force, there will be no reason she cannot donate to political campaigns, despite 52 U.S.C. §30121’s prohibition on contributions by nonresident foreign nationals in as much as freedom of political expression is plainly fundamental to our system of ordered liberty.”

“I see no reason that she may not possess a firearm, notwithstanding 18 U.S.C. § 922(g)(5)’s prohibition on doing so while ‘illegally or unlawfully in the United States,’” said Henderson, “inasmuch as ‘the Second Amendment conferred an individual right to keep and bear arms.’”

In his own dissent in Garza v. Hargan, Judge Kavanaugh accepted the assumption that an illegal alien like Jane Doe did in fact have a right to abortion in the United States under standing Supreme Court precedents. Kavanugh argued, instead, that that did not give the illegal alien a “right to immediate abortion on demand.”

“The three-judge panel held that the U.S. Government, when holding a pregnant unlawful immigrant minor in custody, may seek to expeditiously transfer the minor to an immigration sponsor before the minor makes the decision to obtain an abortion,” wrote Kavanaugh. “That ruling followed from the Supreme Court’s many precedents holding that the Government has permissible interests in favoring fetal life, protecting the best interests of a minor, and refraining from facilitating abortion.

“The Supreme Court has repeatedly held that the Government may further those interests so long as it does not impose an undue burden on a woman seeking an abortion,” said Kavanaugh.

“Today’s majority decision, by contrast, ‘substantially adopts the panel dissent and is ultimately based on a constitutional principle as novel as it is wrong: a new right for unlawful immigrant minors in U.S. Government detention to obtain immediate abortion on demand, thereby barring any Government efforts to expeditiously transfer the minors to their immigration sponsors before they make that momentous life decision.

“The majority’s decision represents a radical extension of the Supreme Court’s abortion jurisprudence,” said Kavanaugh. “It is in line with dissents over the years by Justices Brennan, Marshall, and Blackmun, not with the many majority opinions of the Supreme Court that have repeatedly upheld reasonable regulations that do not impose an undue burden on the abortion right recognized by the Supreme Court in Roe v. Wade.”

Kavanugh hypothesized that even under his argument that the government should be given time to find a sponsor for the illegal alien teenager, it was possible they would not be able to do so expeditiously enought and might be required to allow her to have an abortion while still in federal detention.

"Second, under Supreme Court precedent in analogous contexts, it is not an undue burden for the U.S. Government to transfer an unlawful immigrant minor to an immigration sponsor before she has an abortion, so long as the transfer is expeditious. …

“Third, what happens, however, if a sponsor is not found by October 31 in this case? What happens generally if transfer to a sponsor does not occur expeditiously? To begin with, a declaration we just received from the Government states: ‘while difficult, it is possible to complete a sponsorship process for J.D. by 5 P.M. Eastern on October 31, 2017.’ The declaration also lists several ongoing efforts regarding the sponsorship process. The declaration adds that all components of the U.S. Government ‘are willing to assist in helping expedite the process.’