Editor’s note: Gen. George S. Patton Jr. (1885 – 1945) gave the speech below to the soldiers of the U.S. Third Army on June 5, 1944, one day before the Normandy invasion, D-Day. The speech -- portions of which were delivered by the actor George C. Scott in the 1970 movie “Patton” – is presented below in its entirety.  WARNING: Some of the language is profane; a few colorful expressions were excised and marked with asterix. 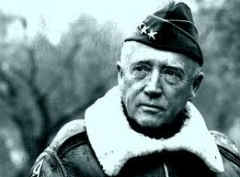 Be seated. Men, this stuff that some sources sling around about America wanting out of this war, not wanting to fight, is a crock of bullshit. Americans love to fight, traditionally. All real Americans love the sting and clash of battle.

When you, here, every one of you, were kids, you all admired the champion marble player, the fastest runner, the toughest boxer, the big league ball players, and the All-American football players.

Americans love a winner. Americans will not tolerate a loser. Americans despise cowards. Americans play to win all of the time. I wouldn't give a hoot in hell for a man who lost and laughed. That's why Americans have never lost nor will ever lose a war; for the very idea of losing is hateful to an American.

(The audio clip below is from the 1970 movie "Patton," starring George C. Scott, who portrayed the general and presented an edited version of the June 5, 1944 speech in the film.)

You are not all going to die [in the battle]. Only two percent of you right here today would die in a major battle. Death must not be feared. Death, in time, comes to all men. Yes, every man is scared in his first battle. If he says he's not, he's a liar.

Some men are cowards but they fight the same as the brave men or they get the hell slammed out of them watching men fight who are just as scared as they are. The real hero is the man who fights even though he is scared. Some men get over their fright in a minute under fire. For some, it takes an hour. For some, it takes days.

But a real man will never let his fear of death overpower his honor, his sense of duty to his country, and his innate manhood. Battle is the most magnificent competition in which a human being can indulge. It brings out all that is best and it removes all that is base. Americans pride themselves on being He Men and they are He Men. Remember that the enemy is just as frightened as you are, and probably more so. They are not supermen.

All through your Army careers, you men have bitched about what you call ‘chicken s*** drilling.’ That, like everything else in this Army, has a definite purpose. That purpose is alertness. Alertness must be bred into every soldier. I don't give a f*** for a man who's not always on his toes.

You men are veterans or you wouldn't be here. You are ready for what's to come. A man must be alert at all times if he expects to stay alive. If you're not alert, sometime, a German son-of-a-bitch is going to sneak up behind you and beat you to death with a sockful of s***!

There are 400 neatly marked graves somewhere in Sicily -- all because one man went to sleep on the job.

But they are German graves, because we caught the bastard asleep before they did.

3rd Army tank during the Battle of the Bulge.

An Army is a team. It lives, sleeps, eats, and fights as a team. This individual heroic stuff is pure horse shit. The bilious bastards who write that kind of stuff for the Saturday Evening Post don't know any more about real fighting under fire than they know about f******!"

We have the finest food, the finest equipment, the best spirit, and the best men in the world. Why, by God, I actually pity those poor sons-of-bitches we're going up against. By God, I do.

My men don't surrender. I don't want to hear of any soldier under my command being captured unless he has been hit. Even if you are hit, you can still fight back. That's not just bullshit either.

The kind of man that I want in my command is just like the lieutenant in Libya, who, with a Luger against his chest, jerked off his helmet, swept the gun aside with one hand, and busted the hell out of the Kraut with his helmet. Then he jumped on the gun and went out and killed another German before they knew what the hell was coming off. And, all of that time, this man had a bullet through a lung. There was a real man!

All of the real heroes are not storybook combat fighters, either. Every single man in this Army plays a vital role. Don't ever let up. Don't ever think that your job is unimportant. Every man has a job to do and he must do it. Every man is a vital link in the great chain.

What if every truck driver suddenly decided that he didn't like the whine of those shells overhead, turned yellow, and jumped headlong into a ditch? The cowardly bastard could say, ‘Hell, they won't miss me, just one man in thousands.’ But what if every man thought that way? Where in the hell would we be now? What would our country, our loved ones, our homes, even the world, be like? No, damnit, Americans don't think like that.

Every man does his job. Every man serves the whole. Every department, every unit, is important in the vast scheme of this war. The ordnance men are needed to supply the guns and machinery of war to keep us rolling. The Quartermaster is needed to bring up food and clothes because where we are going there isn't a hell of a lot to steal. Every last man on K.P. has a job to do, even the one who heats our water to keep us from getting the ‘G.I. S****.’

Each man must not think only of himself, but also of his buddy fighting beside him. We don't want yellow cowards in this Army. They should be killed off like rats. If not, they will go home after this war and breed more cowards. The brave men will breed more brave men. Kill off the damnd  cowards and we will have a nation of brave men.

One of the bravest men that I ever saw was a fellow on top of a telegraph pole in the midst of a furious fire fight in Tunisia. I stopped and asked what the hell he was doing up there at a time like that. He answered, ‘Fixing the wire, Sir.’ I asked, ‘Isn't that a little unhealthy right about now?’ He answered, ‘Yes Sir, but the damned wire has to be fixed.’ I asked, ‘Don't those planes strafing the road bother you?’ And he answered, ‘No, Sir, but you sure as hell do!’

We got through on good old American guts. Many of those men drove for over 40 consecutive hours. These men weren't combat men, but they were soldiers with a job to do. They did it, and in one hell of a way they did it. They were part of a team. Without team effort, without them, the fight would have been lost. All of the links in the chain pulled together and the chain became unbreakable.

Now, there was a real man. A real soldier. There was a man who devoted all he had to his duty, no matter how seemingly insignificant his duty might appear at the time, no matter how great the odds. And you should have seen those trucks on the road to Tunisia. Those drivers were magnificent. All day and all night they rolled over those son-of-a-bitching roads, never stopping, never faltering from their course, with shells bursting all around them all of the time.

Don't forget, you men don't know that I'm here. No mention of that fact is to be made in any letters. The world is not supposed to know what the hell happened to me. I'm not supposed to be commanding this Army. I'm not even supposed to be here in England. Let the first bastards to find out be the G***amned Germans. Some day I want to see them raise up on their piss-soaked hind legs and howl, ‘It's the  damned Third Army again and that son-of-a-f***ing-bitch Patton.’

We want to get the hell over there. The quicker we clean up this damned mess, the quicker we can take a little jaunt against the purple pissing Japs and clean out their nest, too. Before the damned Marines get all of the credit.

Sure, we want to go home. We want this war over with. The quickest way to get it over with is to go get the bastards who started it. The quicker they are whipped, the quicker we can go home. The shortest way home is through Berlin and Tokyo. And when we get to Berlin, I am personally going to shoot that paper hanging son-of-a-bitch Hitler. Just like I'd shoot a snake!

When a man is lying in a shell hole, if he just stays there all day, a German will get to him eventually. The hell with that idea!  The hell with taking it!  My men don't dig foxholes. I don't want them to. Foxholes only slow up an offensive. Keep moving. And don't give the enemy time to dig one either.

We'll win this war, but we'll win it only by fighting and by showing the Germans that we've got more guts than they have; or ever will have. We're not going to just shoot the sons-of-bitches, we're going to rip out their living G***amned guts and use them to grease the treads of our tanks.

We're going to murder those lousy Huns by the bushel-f***ing-basket. War is a bloody, killing business. You've got to spill their blood, or they will spill yours. Rip them up the belly. Shoot them in the guts. When shells are hitting all around you and you wipe the dirt off your face and realize that instead of dirt it's the blood and guts of what once was your best friend beside you, you'll know what to do!

I don't want to get any messages saying, ‘I am holding my position.’   We are not holding a damned thing. Let the Germans do that. We are advancing constantly and we are not interested in holding onto anything, except the enemy's b****.  We are going to twist him and kick the living s***  out of him all of the time.

Our basic plan of operation is to advance and to keep on advancing regardless of whether we have to go over, under, or through the enemy. We are going to go through him like crap through a goose; like s*** through a tin horn!

From time to time there will be some complaints that we are pushing our people too hard. I don't give a good damn about such complaints. I believe in the old and sound rule that an ounce of sweat will save a gallon of blood.

There is one great thing that you men will all be able to say after this war is over and you are home once again. You may be thankful that 20 years from now when you are sitting by the fireplace with your grandson on your knee and he asks you what you did in the great World War II, you won’t have to cough, shift him to the other knee and say, ‘Well, your Granddaddy shoveled s*** in Louisiana.’

No, Sir, you can look him straight in the eye and say, ‘Son, your Granddaddy rode with the Great Third Army and a son-of-a-bitch named Georgie Patton!