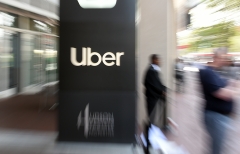 In this pan zoom image, an Uber logo is seen outside the company's headquarters in San Francisco, Calif. (Photo credit: JOSH EDELSON/AFP via Getty Images)

But there is no longer any question at all about where voters in forced-unionism California stand on one of the key planks in Biden’s 2020 labor-policy platform:  They are lopsidedly opposed to it.

For more than a year now, a popular rebellion has been intensifying against A.B.5, a massive expansion of forced unionism seeking to rob 1.5 million independent contractors in the Golden State of their workplace freedoms. Meanwhile, Biden has been vowing again and again to fight for enactment of a federal law subjecting contractors across the country to the same regime.

In 2019, union-label Sacramento lawmakers rubber-stamped A.B.5, and Democrat Gov. Gavin Newsom eagerly signed it, ignoring warnings from Right to Work activists and other citizens about the disastrous impact it would have.

Once it took effect this January, A.B.5 reclassified drivers for ride-share and delivery companies like Uber, Lyft, and DoorDash, as well other independent contractors like truck owner-operators, therapists, artists, musicians, and writers, as “employees” under California law. Big Labor’s obvious goal in lobbying for A.B.5 was to make all such workers vulnerable to union monopoly bargaining, and to being forced to pay union dues, on pain of termination.

Had the ride-share firms, which only aspire to be profitable, and their contractors immediately submitted to A.B.5, it would no longer have been economically feasible for the drivers to set their own hours and work with competing companies at the same time. Such arrangements are an integral part of ride-share and delivery companies’ business strategy. If they opted to continue operating in California at all, Uber, Lyft, and other similar companies would have had to pare back driving slots dramatically, or face insurmountable losses.

Rather than submit, the companies, acting with the support of many drivers, resisted. Attorneys representing Uber explained in court filings that it was fundamentally a technology company, not a transportation company, and therefore A.B.5 did not apply to its drivers. This argument was definitively rejected by a state appeals court on Oct. 22, but it bought the companies and drivers who wished to remain independent time to mount a ballot-box challenge to A.B.5.

The challenge -- known as Proposition 22 -- exempted hundreds of thousands of California drivers for ride-share and delivery companies from A.B.5’s provisions. It was part of the statewide ballot on Election Day. Union-label lawmakers chastened by vociferous protests from other kinds of independent contractors had already exempted dozens of other types of service providers from A.B.5’s provisions by late this summer. Consequently, Prop. 22 threatened to reduce this scheme to just a shell of its former self.

When they finally had their say, voters stunned pundits who, shortly before Election Day, were predicting Democrat-dominated California would side with Big Labor and against independent contractors and their client firms.

How will Biden and House Speaker Nancy Pelosi respond to the Prop. 22 outcome, should the former emerge victorious in his campaign for the White House? Biden and Pelosi have both long been cheerleaders for A.B.5, and for the adoption of a federal law subjecting independent contracts nationwide to an A.B.5-like regime.

After the California returns were in, former Clinton Administration National Labor Relations Board Chairman William Gould, whose views tend to reflect those of Washington, D..C.’s pro-forced unionism establishment, actually suggested that a President Biden could and should “fix” what California voters did by pushing for and signing a bill that imposes A.B. nationwide, and thus overrides Prop. 22.

That would be a grave political mistake.  If Biden does become the next president, and he wants to be a successful one, he should heed the message of California voters, who favored him over Trump, and resolve to abandon his plans to federalize A.B.5.