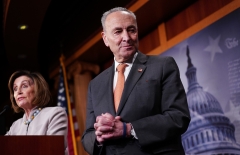 Radicals are cramming a federal takeover of elections through a key vote on the Corrupt Politicians Act, part of their plan with Joe Biden and Kamala Harris to transform America into a permanent one-party socialist nation.

Also normally, a Senate committee vote sounds so boring that you only hear about it if you stumble onto a news station on your way to finding the baseball game on TV. But this time your children’s freedom is at stake, as Senate Democrats move one step closer to eradicating the freedoms that make America the greatest nation on earth.

S. 1 is an 880-page federal takeover of all elections nationwide, abolishing voter ID and other commonsense election integrity safeguards, and mandating monthlong mail-in balloting and other measures that could hijack elections in every state for every election going forward. It would ensure that Republicans can never win another nationwide election for president or for congressional control.

As S. 1 goes to the floor, Republicans will filibuster it, which would normally take 60 votes to circumvent. But Schumer is determined to use the “nuclear option” to blow up over a century of Senate rules to abolish the filibuster and force S. 1 through on a 50-50 party-line vote, because the Constitution says that the vice president breaks all tie votes, and Vice President Kamala Harris is chomping at the bit to seize permanent power in America by making the vote 51-50.

All that stands in their way are two Democrat senators who say they will not nuke the filibuster: Sen. Joe Manchin (D-WV) and Sen. Kyrsten Sinema (D-AZ). If either one keeps their word, S. 1 will not pass.

Biden relentlessly calls on the Senate to pass S. 1, even bringing Manchin to the White House before the committee vote, no doubt trying to talk the West Virginian into breaking his promise to his home state. Gone is the Biden of past decades, replaced by an old, tired, radicalized version of Biden who robotically supports the extremist socialist agenda put on his desk for signature by Harris, White House Chief of Staff Ron Klain, Schumer, and House Speaker Nancy Pelosi (D-CA).

It’s key for all Americans to understand how the S. 1 (H.R. 1) Corrupt Politicians Act fits into this power grab to fundamentally transform America into a socialist nation under permanent one-party rule.

Our Constitution’s key to freedom is that it takes government power and breaks it. It breaks power between the federal government and the states. It also breaks federal power between the president, Congress, and the Supreme Court, and sets them against each other. If the power players are busy arm-wrestling with each other, it forces them to leave you free to live your life. That formula has worked for us for more than 200 years.

The common tie in the various pieces of big legislation the Democrats are trying to ram through is that it would undo this formula for liberty. It's not just S. 1; Democrats are trying to pass H.R. 51 to make D.C. a state to give them two more Democrat senators and an instant 52-50 majority to ram through their radical socialist agenda. They’re trying to pass mass amnesty to turn 11 million illegal aliens into voting citizens who would vote for a permanent expansion of the welfare state, paid for by hardworking Americans. They’re trying to pack the Supreme Court by expanding it from nine justices to 13 so that they have a guaranteed liberal majority to rubber-stamp all their unconstitutional socialism.

Any one of these four bills would give the far-left wing of the Democrat Party – Alexandra Ocasio Cortez (AOC), Ilhan Omar, Rashida Tlaib, Cori Bush, Mondaire Jones – permanent control of the House, Senate, the White House – and even the Supreme Court.

Schumer is doing his part to push through that agenda in the arena of voting. Once he gets S. 1 through the Senate Rules Committee, he will execute a full-court press on Manchin and Sinema to cave on their commitment to their home states and the nation to protect the role the filibuster plays in making the Senate a place where senior statesmen need to build consensus to pass transformational legislation.

On the election integrity front, Republican governors and legislators nationwide continue passing laws to restore decades of election safeguards that have been abandoned in recent years, laws that make it easy to vote, but hard to cheat.

With H.R. 1 and S. 1, Biden, Harris, Pelosi, and Schumer are pushing a key component to seize perpetual power, and fundamentally transform America.

Ken Blackwell, the former Ohio Secretary of State is on the policy board of the American Constitutional Rights Union and the board of the Public Interest Legal Foundation