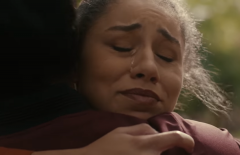 Featured is a scene from the short pro-life film "Worth It." (Photo credit: YouTube/Alliance Defending Freedom)

There were just 30 minutes until sundown. Our gear was strewn across the yard of a small ranch house outside Chicago. Lights and cameras were concentrated on two young actors sitting on the stoop whose performance in the next 15 minutes would make or break the last two months of work. Then the neighbor’s lawnmower started.

Eight weeks earlier, I was pacing my apartment and racking my brain for a fresh approach to a pro-life video. "Worth It," the video I eventually wrote, opted for a light touch. Instead of addressing abortion directly, we filmed an array of scenes from a single mother’s life bookended by two conversations: first, between her and the absent father, and second, with her grown son. In the first, she asks whether having a child will be worth it. In the second, she answers her own question of 30 years prior, assuring her son that it is.

With funding from my employer, Alliance Defending Freedom, and after six frantic weeks of pre-production, I flew to Chicago to film with a crew from Spirit Juice Studios. Over three days, we attempted to synthesize three decades of life. Needless to say, the schedule was tight. So I found myself offering our producer $100 in cash to pay off the guy who fired up his lawnmower right when we needed to record the dialogue on the stoop. She, being more budget-conscious, opted to try her Southern charm on the fellow first. So, we got vital minutes of silence for free before the sun (which can’t be bought) finished its daily lap. We wrapped successfully and released "Worth It" a few weeks later.

Just as every life follows the pattern of many others yet remains unique, my hope is that "Worth It" will contribute to the broader fight for life with its own unique voice.

There is spirited debate in the pro-life movement about the best way to argue our case. I would not presume to settle it. But I think we often misunderstand the question as it exists in the psyche of those who oppose us. To us, abortion is a question of truth or falsehood, good or evil. We therefore think that if we can convince people of the truth or make them see the evil, they will be on our side.

On the contrary, I think most people know the truth about abortion, particularly pregnant mothers. What they do not know is whether the truth can do them any good. The choice they experience is not between true and false, but between happiness and truth. When that’s the choice, it’s very hard for truth to win. But the deeper lie is the question itself.

It’s the oldest lie in the book: You can be happy, or you can do what’s right, but not both. It’s the lie that cost Adam and Eve paradise eons ago and has cost America tens of millions of lives to date. To believe this lie is to succumb to despair, for if we cannot simultaneously live the truth and be happy, then we cannot ever be truly happy. Framed this way, we can see abortion as it truly is: a choice not just between life and death but also hope and despair.

The abortion industry markets despair to women, monetizes despair with abortion, and peddles the process to society as health care. There is righteous anger against those who perpetuate this vile system, but the best way to throw a wrench in it is not by anger, but by giving its would-be victims hope.

Such hope must be based in truth. So, in "Worth It," I chose to show the real-life trials that come when a young woman chooses life. In doing so, I aimed to illustrate the deeper and brighter truth — that life is beautiful in itself, that hardship can dim its goodness but not erase it, and that those who put their trust in life over death will not be disappointed in the end. In short, life is worth it.