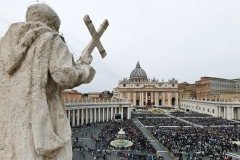 There will be no recognition of homosexual unions or marriage by the Catholic Church. It is non-negotiable. End of story.

Pope Francis has been under considerable pressure by gay activists, in and out of the Church, to give the green light to gay marriage. The statement released by the Congregation for the Doctrine of the Faith to queries on this issue is the most decisive rejection of those efforts ever written.

The Church's top doctrinal office said, "it is not licit to impart a blessing on relationships, partnerships, even stable, that involve sexual activity outside of marriage (i.e, outside the indissoluble union of a man and a woman open in itself to the transmission of life), as is the case of the unions between persons of the same sex." It further noted that "since blessings on persons are in relationship with the sacraments, the blessing of homosexual unions cannot be considered licit."

The statement made it clear that this "does not preclude the blessings given to individual persons with homosexual inclinations, who manifest the will to live in fidelity to the revealed plans of God as proposed by Church teaching." It is homosexual unions that are the problem, not homosexuals.

Speaking of homosexuality, Vatican officials said it cannot "approve and encourage a choice and a way of life" that is not "objectively ordered."

God, they declared, "does not and cannot bless sin." In short, "the Church does not have, and cannot have, the power to bless unions of persons of the same sex."

The Vatican left nothing on the table. The door has been slammed shut on the gay agenda.