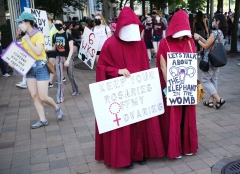 On Wednesday, the U.S. Supreme Court will hear oral arguments on the most important abortion case ever brought since Roe v. Wade; indeed, it could overturn Roe. The case involves a Mississippi law that would ban abortions after 15 weeks of pregnancy. A decision is not expected until June 2022. One thing is for sure: there will be plenty of pro-life and pro-abortion protesters outside the Supreme Court.

The way protesters on opposing sides typically conduct themselves is dramatic. In early October, at the beginning of the Supreme Court's new term, pro-life and pro-abortion activists protested outside the high court.

Pro-life protesters were shown praying, saying the rosary, holding huge sheets of paper with the names of Americans who signed a petition to end abortion, and carrying a wooden Cross with the inscription, "Jesus Saves."

In keeping with this respectful approach, the pro-life side convened a prayerful event on Sunday in Jackson, Miss. The "Pray Together for Life" rally was orchestrated by Tony Perkins of the Family Research Council and was attended by other prominent pro-life leaders.

By contrast, in early October, pro-abortion protesters were shown carrying anti-Catholic signs, "Keep Your Rosaries Off My Ovaries," and placards denouncing pro-life activists, "You Are Pro-Life Until the Baby Is Poor, Black, Transgender, Gay, Mexican, Disabled, Sick."

Other pro-abortion signs included, "Consent to Sex Is Not Consent to Pregnancy," "My Body Is Not A Political Playground," "You Will Not Control Us," and "When Will My Body Be My Own?" Those who were arrested included a woman who held her hands above her head with a hanger placed around her wrists.

The pro-abortion camp also distorts the truth. Pro-life Americans, who tend to be religious, are far more generous in giving to the poor than their secular pro-abortion counterparts. Thus, the bit about them not caring about all babies is ludicrous. But it is at least refreshing for the pro-abortion side to acknowledge that a pregnant woman is carrying a baby. If they weren't so clueless, they would understand that this seriously undercuts their position.

Similarly, pregnant women are carrying the body of another human being, thus negating the foolish contention that abortion affects only the body of the expectant mother. Moreover, it is irresponsible for men and women who consent to having sex to deny that they are at least potentially consenting to pregnancy. Indeed, such irresponsibility accounts for a large part of the problem.

The media will surely cover the protests outside the Supreme Court on Wednesday. But given that most reporters are on the pro-abortion side, don't look for the coverage to be fair.