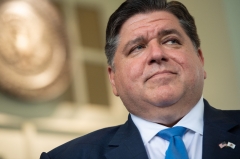 Gov. J.B. Pritzker of Illinois speaks to the media outside of the West Wing of the White House. (Photo credit: SAUL LOEB/AFP via Getty Images)

Now that the new school year is upon us, it is important for parents to understand how the sexual engineers in education are trying to program students into accepting gender ideology. For an example of this, look no further than Illinois, where Gov. J.B. Pritzker on Friday signed into law one of the most radical sex engineering curricula in the country.

The scope of the Illinois curriculum goes far beyond conventional sex education programs. Indeed, it is the most extreme attempt to transform the norms and values of young people ever envisioned.

To that end, we have prepared a three-part series of reports on this subject; they will be rolled out this week.

Pope Francis has called gender ideology—the idea that the sexes are interchangeable—"demonic." We call transgender surgery performed on minors "child abuse." Unfortunately, the ruling class is not content to disagree: when its members are not flatly lying about biological differences between males and females, they are engaged in censorship.

Over the summer, the elites went into high gear.

Twitter suspended several writers who dared to say that a male Olympic weightlifter who identifies as a female is a man.

The American Medical Association (AMA) issued a statement saying, "Designating sex on birth certificates as male or female, and making that information available on the public portion, perpetuates a view that sex designation is permanent and fails to recognize the medical spectrum of gender identity."

The American Academy of Pediatrics not only agrees with the AMA, but it also would not allow doctors to set up a booth at its annual conference challenging its flawed transgender position.

Even more disconcerting, President Biden is trying to force doctors to perform sex transition surgeries. He was stopped by a federal court in Texas, but this issue is not over. Our "devout Catholic" president has absolutely no respect for conscience rights and is promoting child abuse as well.

Fortunately, the American College of Pediatricians and the National Catholic Bioethics Center are both telling the truth. They understand, as even middle school students do, that boys are boys and girls are girls—that's the way human nature works.

The first of our three reports will focus on school curricula examples of the way transgender subjects will be presented. The second covers the physical damage that is being done, and the third examines the psychological damage.

Please disseminate these reports widely. There is much at stake, including the well-being of our children.