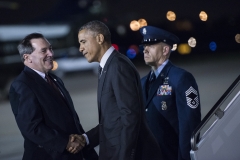 Several Catholic news outlets, including Catholic News Service, have reported that Joseph Donnelly, President Biden's nominee to be the new U.S. ambassador to the Holy See, is a "pro-life" Democrat. They are wrong. Worse, Donnelly is not only at odds with the Catholic Church on abortion; he is pro-gay marriage, against religious liberty, and against school choice.

Donnelly also voted for the Affordable Care Act, or Obamacare, in 2010, even though the bill required Catholic nonprofits, such as the Little Sisters of the Poor, to pay for abortion-inducing drugs in their healthcare plans.

According to Bill McGurn of the Wall Street Journal, he was not initially in favor of the bill, but a phone call from the former president of Notre Dame University, Father Theodore Hesburgh—done at the behest of House Speaker Nancy Pelosi—convinced him to change his mind. It worked. Thereafter, Donnelly never voted to repeal Obamacare.

Donnelly's support for Obamacare pitted him against the United States Conference of Catholic Bishops (USCCB). In 2012, Cardinal Timothy Dolan, president of the USCCB, wrote that the Obama Administration "has refused to exempt religious institutions that serve the common good—including Catholic schools, charities, and hospitals—from its sweeping new health-care mandate that requires employers to purchase contraception, including abortion-producing drugs, and sterilization coverage for their employees."

In 2017, when President Donald Trump signed a bill that would deny states the right to use Title X funds to enable abortion providers, Donnelly voted against it.

In August 2015, Donnelly voted against funding Planned Parenthood, but literally four months later he voted to fund it. In 2018, he once again voted to have the taxpayers fund this abortion-clinic behemoth.

On gay marriage, Donnelly went through a similar "evolution." He was initially opposed to it, which is why the Human Rights Campaign, a prominent gay organization, gave him a score of only 30 percent when he was in the House. But when he got to the Senate, this homosexual entity was so delighted with him that it gave him a score of 85 percent.

In 2013, the USCCB issued a statement opposing the Employment Non-Discrimination Act (ENDA). The bill, which was promoted as a way to protect homosexuals from being discriminated against in the workplace, was much more than that. "The bill does not distinguish," the bishops said, "between sexual inclination and sexual conduct."  The bishops also criticized the bill for inadequate religious-liberty protections. Donnelly voted for it.

A year later, after the U.S. Supreme Court issued its "Hobby Lobby" ruling—it protected the religious rights of private business owners—the Democrats sought to undo it. Bishop Timothy L. Doherty of the Lafayette Diocese was none too happy with Donnelly:

"Two weeks after they pleaded with Congress to maintain our religious freedom, a majority of the Senate—including our own Sen. Joe Donnelly of Indiana—voted to move forward with legislation to take that freedom away."

In 2015, Donnelly fought against an Indiana bill that would safeguard religious liberty. The bill, which was modeled after the 1993 Religious Freedom Restoration Act, had already been adopted by 30 states. More importantly, allegations that it would lead to discrimination against homosexuals were unfounded. The evidence showed that these laws did not engender a single act of discrimination against any American.

In Donnelly's last term in the Senate, he voted against a school choice measure that would have allowed families to use 529 account funds to help pay for private and secondary education, including homeschooling. Thus did he stand fast against the bishops in their support for school choice initiatives that would assist Catholic schools.

Joe Donnelly started out as a Catholic official who was mostly in line with the policy prescriptions of the Catholic Church. But he ended his career in government as a foe of the Church's moral teachings. Now he wants to represent the U.S. at the Vatican.

There is a reason why Donnelly was co-chair of Catholics for Biden. Like our "devout Catholic" president, he turned rogue.