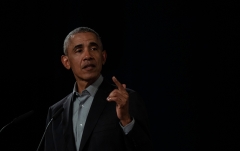 This week, former President Barack Obama reemerged from hibernation to lecture Americans about the threat to rule of law posed by the Trump administration.

After Attorney General Bill Barr announced that the Department of Justice would be dropping its case against President Donald Trump's former national security advisor Michael Flynn, who had pled guilty to one count of lying to the FBI, Obama told his former aides, "our basic understanding of rule of law is at risk." He explained, "There is no precedent that anybody can find for someone who has been charged with perjury just getting off scot-free....And when you start moving in those directions, it can accelerate pretty quickly, as we've seen in other places."

In reality, of course, Flynn was never charged with perjury. He was charged with lying to the FBI in the course of an investigation, a separate and far lesser offense, particularly given the fact that his alleged lie was immaterial to any underlying crime. In fact, as America found out over the past two weeks, Flynn wasn't supposed to be the subject of any investigation at all: The FBI had decided to close an investigation into Flynn in January 2017, even after supposedly nefarious calls between Flynn and Russian Ambassador Sergey Kislyak.

Disgraced former FBI agent Peter Strzok — the same man who pledged to lover and former FBI attorney Lisa Page that Donald Trump would never be president and suggested an "insurance policy" against that possibility — then intervened to keep the investigation open. The next day, during an Oval Office meeting, President Obama himself asked then-FBI Director James Comey about the Flynn-Kislyak communications.

Next, Comey upped the ante: He avoided following normal FBI-White House protocols in order to interview Flynn and Comey's deputy director, Andrew McCabe, avoided informing Flynn of his rights. Nonetheless, the FBI agents who conducted the interview suggested that they did not think Flynn was lying during that interview. As it turns out, notes between top FBI officials at the time said, "What's our goal? Truth/Admission or to get him to lie, so we can prosecute him or get him fired?" Flynn would later plead guilty to one count of lying to the FBI — at least in part because the FBI was threatening his son with prosecution.

This should be a massive scandal. It should be a massive scandal because, at the very least, it demonstrates the nation's chief law enforcement agencies, prompted by political actors at the very top of the government, racing to bend the rules in order to pursue a case they were convinced they would make: the case that the Trump campaign had conspired with the Russian government. From the purposefully botched Carter Page Foreign Intelligence Surveillance Act warrant to the absurdly conjured prosecution of Flynn, the most powerful institutions in American life violated the protocols meant to restrict abuse, firmly secure in their own feelings of moral rectitude.

The worst-case scenario is far darker: that by early January, with no evidence of Russian collusion, leaders of the nation's political and law enforcement agencies decided that guilt was irrelevant, and that the Trump administration had to be strangled in the crib. This seems like a major stretch, but in a highly partisan era, such a narrative will have legs.

Meanwhile, blithe in the knowledge that they were on the side of the angels, members of the Obama-era government continue to chide Attorney General Bill Barr for ending a charade of a case. Their incredible inability to see how their conduct looks beyond the echo chamber of sycophantic media sources only undermines their credibility further.

As it turns out, President Obama isn't wrong — at least not entirely. Our basic understanding of the rule of law is at risk, not because Bill Barr stepped in to prevent an unjust prosecution but because our institutions under the Obama administration were politicized in ways that should shock the American conscience.

Ben Shapiro, 36, is a graduate of UCLA and Harvard Law School, host of "The Ben Shapiro Show" and editor-in-chief of DailyWire.com. He is the author of the No. 1 New York Times bestseller "The Right Side of History." He lives with his wife and two children in Los Angeles.