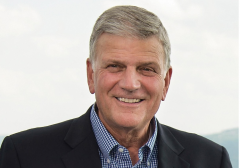 During an interview on the Todd Starnes Radio Show, evangelical leader Franklin Graham expressed disgust with the political corruption and moral decay in the country, and urged Christians to "get on their knees and pray" because he believes "God's judgment is coming."

In the April 16 interview, host Todd Starnes mentioned how the Democrats in Congress want to pack the Supreme Court. Rev. Graham said this is "very dangerous" because they are trying to "upset the balance of power."

"We just need to pray that God will intervene and stop them from doing this,” Graham said.

“It just seems like the whole country is upside down right now," he added. "We just need to pray that not only will God bring his voice to the table, so to speak, but that people would listen to Him and seek His face and call on His name because our country is in great trouble.”

Later in the interview, Graham said, “What’s happened politically in our country is a disgrace, what took place in the last election. It’s wrong, but it’s happened. And I just believe that the only hope for our nation is God."

"Christians need to get on their knees and pray that God would intervene and somehow save this nation or give us more time because I believe judgment is coming," said Graham.  "I really do, Todd, I think God’s judgment is coming.”

"On this coronavirus, this pandemic we're in, I'm not sure we'll ever get out of it," said the reverend. "I'm not sure that our world will ever go back to the way it was."

"The bureaucrats want power, they love control," he said. "And this pandemic has given them almost complete control. Governors, on their own, can shut down a whole state. Put people out of business, close businesses. Just by declaring it."

"But at the same time, I’ve read the last pages of history," he added. "I know what God is going to do and His Son is coming back and He’s going to establish His kingdom here on this earth.”