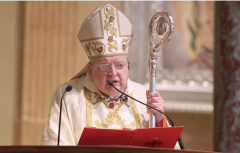 In his sermon on Dec. 12, U.S. Cardinal Raymond Burke, who serves on the highest court at the Vatican, said that "Marxist materialism" seems to have corrupted America's "governing power," and that "certain forces, inimical to families and to the freedom of nations" are using the COVID-19 pandemic "to advance their evil agenda."

Cardinal Burke, 72, the former Archbishop of St. Louis, added that "these forces" are pushing a so-called "Great Reset," or "new normal," which is "dictated to us by their manipulation of citizens and nations through ignorance and fear."

Burke made his remarks at the shrine of Our Lady of Guadalupe in LaCrosse, Wisc.

"Our nation is going through a crisis which threatens its very future as free and democratic," said Burke. "The worldwide spread of Marxist materialism, which has already brought destruction and death to the lives of so many, and which has threatened the foundations of our nation for decades, now seems to seize the governing power over our nation."

"To attain economic gains, we as a nation have permitted ourselves to become dependent upon the Chinese Communist Party, an ideology totally opposed to the Christian foundations upon which families and our nation, remain safe and prosper," said Burke.

As for the "Wuhan virus," the mass media only provide "conflicting information" on a daily basis, he said.

"What is clear, however, is that it has been used by certain forces, inimical to families and to the freedom of nations, to advance their evil agenda," said the cardinal.

"These forces tell us that we are now the subjects of the so-called ‘Great Reset,’ the ‘new normal,’ which is dictated to us by their manipulation of citizens and nations through ignorance and fear," he added.

"Now, we are supposed to find in a disease and its prevention the way to understand and direct our lives," he said, "rather than in God and in His plan for our salvation."

As these troubles afflict us, the church is also infected, said the cardinal. "[O]ur holy Mother Church, the spotless bride of Christ, in which Christ is ever at work for our eternal redemption, is beset by reports of moral corruption, especially in matters of the sixth and seventh commandments, which seem to increase by the day."

"[T]he Church falsely wants to accommodate Herself to the world, instead of calling the world to conversion in obedience to the divine law written on every human heart and revealed in fullness in the redemptive, incarnation of God the Son," said Burke.

He continued, "At a time when we need to be close to one another in Christian love, worldly forces would isolate us and have us believe that we are alone and dependent upon secular forces which would make us slaves to their godless and murderous agenda."

"Yes, our hearts are understandably heavy, but Christ ... will never be unfaithful to his promises," said Burke.  "He will never abandon us. Let us not be beguiled by the forces of the world and by false prophets. Let us not abandon Christ and seek our salvation in places where it never can be found."

To read more about the Great Reset, click here.