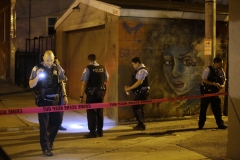 "The violence throughout the city on Memorial Day weekend was nothing short of alarming,” said Chicago Police Superintendent David Brown on Tuesday.

One man, Tobias O'Neal, 41, was found near midnight Friday on the sidewalk on Chicago's South Side "with gunshot wounds throughout his body," reported ABC 7.

A young man, 27, was fatally shot in the stomach early on Saturday, on the South Side.

In another case, "[s]omeone approached 16-year-old Darnell Fisher about 10:05 p.m. in the 6100-block of South Indiana Avenue and shot him in the chest and arm, authorities said. The boy was taken to the University of Chicago Medical Center and pronounced dead. He lived in Washington Park."

Also on Saturday evening, a 28-year-old man was shot in the head and died, reported ABC 7. He had been standing on the sidewalk and two men were seen fleeing the scene.

In another incident, on Sunday about 3:00 p.m. "a male was in a vehicle in an alley in the 400-block of East 103rd Street when someone walked up and fired shots, police said. He was shot in the face and chest and taken to Christ Medical Center in Oak Lawn, where he was pronounced dead," said ABC 7.

In one of the non-fatal shootings, "a 15-year-old boy was shot multiple times Saturday in South Shore," said the local affiliate. "He got into an argument at 12:49 a.m. with the driver of a blue SUV, according to police. The driver then got out and shot the teen in the face, chest and abdomen. The boy was taken to Comer Children's Hospital in critical condition."

In addition to the weekend violence, ABC News reported that although the coronavirus "has kept so many people home and temporarily shuttered businesses, homicides in Chicago are on the rise this year. According to police crime statistics posted online, between Jan. 1 and May 24, the city had 200 homicides, compared with 176 during the same period last year. The number of shooting incidents climbed from 679 to 826."