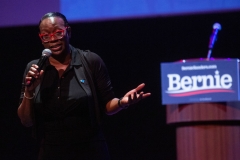 Messing was responding to a tweet claiming that West’s announcement is “probably a plan between trump and Kanye to strip whatever support they can away from Biden as a last ditch effort,” Breitbart reported.

Sanders spokeswoman Nina Turner responded by saying that black voters are “not owned by anyone.”

“You just can’t stop dipping can you @DebraMessing?” Turner tweeted. “Your connotation is racist. 1. Black voters are not owned by anyone. Our vote should be earned every election cycle. 2. We can think for ourselves & don’t need your help. 3. Sometimes it’s best to stay out of family business.”

This isn’t the first time that the “Will and Grace” actress has made disparaging remarks about blacks.