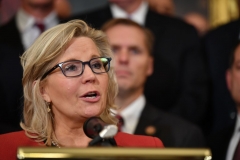 Rep. Liz Cheney(R-WY) speaks during a press conference on the impeachment process in the Rayburn Room of the US Capitol in Washington, DC on October 31, 2019. (Photo by MANDEL NGAN/AFP via Getty Images)

Rep. Liz Cheney (R-Wyo.) sent a memo to House Republicans on Sunday saying there is “no appropriate basis” for them to object to the slate of Electoral College votes on Wednesday, the National Review reported.

The congresswoman said that by doing so, House Republicans “are “unavoidably asserting that Congress has the authority to overturn elections and overrule state and federal courts.”

“Such objections set an exceptionally dangerous precedent, threatening to steal states’ explicit constitutional responsibility for choosing the President and bestowing it instead on Congress. This is directly at odds with the Constitution’s clear text and our core beliefs as Republicans,” Cheney wrote.

“Democrats have long attempted, unconstitutionally, to federalize every element of our nation—including elections. Republicans should not embrace Democrats’ unconstitutional position on these issues,” she wrote.

“Even more problematic,” Cheney said, is the proposal by Sen. Ted Cruz (R-Texas) and other Senate Republicans to reject the Electoral College votes until a 10-day audit.

“The recent proposal for a new ‘Commission’ is even more problematic. It is not reasonable to anticipate that any commission so formed could wrap up its work in 10 days; indeed, the subsequent debate at both the state and federal level would likely require months,” she wrote.

“Did those proposing a new commission realize that they were in essence proposing to delay the inaugural? Did they mean to set up a new future precedent where the inaugural is delayed and we have an ‘Acting President?’ For how long? Who decides when that process is over? Will that require another Act of Congress?” the congresswoman asked.

“Could the Acting President veto any such future Congressional action? If Congress has authority to create such a commission now, are state elections, recounts and state law legal challenges just ‘make-work’ until Congress gets around to investigating and deciding who should be President?” Cheney wrote.

“Members who support the new commission proposal may need to answer each of these questions. And in particular, Members should be prepared to answer how such a commission would be justified by the actual text of our founding documents,” she added.