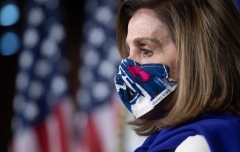 US Speaker of the House Nancy Pelosi speaks during a press conference after being re-elected by Democrats as speaker on Capitol Hill in Washington, DC, November 18, 2020. (Photo by SAUL LOEB/AFP via Getty Images)

House Speaker Nancy Pelosi (D-Calif.) is under fire for allowing Rep. Gwen Moore (D-Wis.) to vote for her as speaker in person less than a week after Moore announced testing positive for COVID-19, The Hill reports.

Moore announced in a tweet on Monday, December 28 that she had tested positive for COVID and then tweeted Sunday, January 3 that she had completed her quarantine and was “medically cleared to travel and work on behalf” of the people in her district.

The CDC guidelines say that people should quarantine for 10 days after the day of a positive COVID test.

Proxy voting also known as remote voting is not allowed for a speaker vote. Pelosi could only afford to lose a handful of Democratic votes and still retain her speakership.

"I tested positive for COVID-19," Moore said in a tweet on December 28. "I am following guidance from my doctor and am isolating from others. I am thankful to be felling well. And I do not foresee this disrupting my work for Wisconsin's Fourth."

"I encourage every person to continue taking measures to prevent the spread of COVID-19 by wearing a mask, washing your hands, and practicing social distancing," Moore said in another tweet she sent on December 28.

On January 3, Moore tweeted: "Thank you all for the well wishes. I am feeling good! My quarantine is over and I am medically cleared to travel and work on behalf of Wisconsin's Fourth Congressional District."

House Minority Leader Kevin McCarthy (R-Calif.) said it was “wrong” for the Democrats to allow Moore to vote so soon after her diagnosis.

“Pelosi is putting the public’s health at risk to keep herself in power,” Rep. Ken Buck (R-Colo.) tweeted.

“Looks like @SpeakerPelosi's proxy voting and remote hearing measures are only essential when her leadership position isn't on the line,” Rep. Bruce Westerman (R-Ark.) tweeted.

“Could there be any greater hypocrisy than if members of Congress urge Americans to take the COVID-19 vaccine, have an opportunity to take the vaccine ahead of many exposed workers, and then continue to send proxies to D.C.? It's time to get back to work,” Westerman tweeted.

“If in-person voting is safe enough for @SpeakerPelosi to keep herself in power, it's safe enough to do the peoples' business according to the Constitution. It's time to end the fear-driven nonsense of proxy voting and make Congress show up for work,” Roy tweeted.