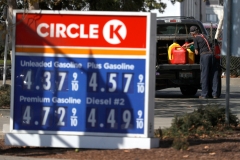 Since January 2021, the price of gasoline has grown an average 35% to $3.27 per gallon, according to Fortune, which is the highest average price since 2014.

Most U.S. households spend about $3,000 a year on gas, said the magazine, and given the higher prices those annual gas costs will climb about $600 this year.

The Labor Department found that the consumer price index for all urban consumers rose 5.4% in the past year. Gasoline prices saw the biggest change.

The U.S. Energy Information Administration noted that this was the highest average gas price in seven years, reported The Wall Street Journal. The chief international economist at ING explained that he expects consumer inflation to remain above 5% through the first quarter of 2022.

The Journal found that U.S. inflation continued its steady increase last month and is at the highest point in over a decade.

Despite the inflation and rising prices, the Biden administration is working to pass its Build Back Better legislation, which was originally stamped with a $3.5 trillion price tag. However, Democrat Senators Joe Manchin (D-W.Va.) and Kyrsten Sinema (D-Ariz.) opposed the size of the bill.

“I, for one, won’t support a $3.5 trillion bill, or anywhere near that level of additional spending, without greater clarity about why Congress chooses to ignore the serious effects inflation and debt have on existing government programs,” Manchin wrote in a Wall Street Journal commentary.

Speaker of the House Nancy Pelosi (D-Calif.) discussed the bill in her weekly press conference on Tuesday.

“I’m very disappointed that we’re not going with the original $3.5 trillion, which was going to be very transformative,” Pelosi said.

With inflation, an increasing national debt, and a push to pass his legislative agenda, President Joe Biden’s approval ratings have fallen over the past few months.  According to Gallup, Biden’s approval is not at 43%.