“Wow. That is the most arrogant, condescending comment I’ve heard in a very long time – and that’s saying something,” African-American Sen. Tim Scott (R-S.C.) said Friday, reacting to former Vice President Joe Biden’s claim that “You Ain’t Black” if you don’t vote for him over President Donald Trump. 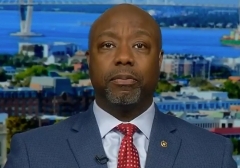 “The man who sponsored and led the charge on the 1990’s crime bill that locked up more African-Americans males than any other piece of legislation and President Trump comes along and through his criminal justice reform corrects the absolute mistakes made by Joe Biden – for him to make such an arrogant, ridiculous comment.”

What’s more, it’s offensive for Biden to tell to the 1.3 million African-Americans who voted for Trump in 2016 that they’re not Black, Sen. Scott said:

“Who in the heck does he think he is? That is the most arrogant, outrageous comment I’ve heard in a very long time. And, I take offense to that.”