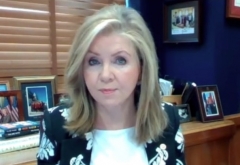 Facebook’s content police are overwhelming liberal because that is how the social media giant controls which viewpoints are seen on their platform, Sen. Marsha Blackburn (R-Tenn.) told a Zoom videoforum discussing the conservative movement’s free-speech concerns about Facebook’s recently-announced global oversight board charged with overseeing content removal and disputes.

“We know that Facebook subjectively manipulates their algorithms” to promote liberal views and repress conservative opinions, Sen. Blackburn explained in her presentation:

“I think one of the things we have to keep in mind as we talk about what is going to happen as we talk about free speech online, is that Mark Zuckerberg, at one point, when he was going through Congressional hearings, had made a comment that Facebook functions more like a government than a company.

“So, we see who he would have as his cabinet, if you will, in a government or a structure that he feels like has that authority to police.

What’s more, Facebook create a more ideologically-balanced team of content reviewer – if it wanted to – but, it doesn’t, because that’s “their way to control the information that you have access to,” Blackburn said:

“Now, they have tried to explain this away by saying, ‘Well, you know, our employees come from the California area, the Bay area: they have a more liberal approach. And, therefore, they bring their world view to work with them.’

“The problem is: if Facebook, if wanted to disperse their reviewers, content reviewers, around the country, they have the opportunity to do that, because their work is done in the virtual space.

“They choose not to do that, because this is their way to control the information that you have access to.”

“This is one of the problems with all of our Big Tech outlets, regardless of whether it’s Facebook or Twitter or Instagram, is the way they prioritize and preference the information that you, the online consumer, is going to have access to.

“Now, I am so appreciative that Brent and the Media Research Center are bringing forward some of the examples of what is happening with Facebook - what is happening to diminish our churches, our religious organizations, conservative entertainment outlets and films.

“And, today in The Wall Street Journal, there is an article that Facebook is joining with universities to distribute a symptoms survey to users that will provide precise data that will help governments and public health officials make decisions. This is according to coronavirus: who has it, where they’re going.

“When you look at that additional intrusion into the privacy of American citizens, this is something that should move to the top of our list.”