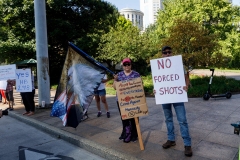 Groups of Americans across the country are fighting back against COVID vaccine and mask mandates by quitting their jobs, walking out of school and taking legal action.

Chicago Public Schools District has even begun offering bribes of $1,000 upfront and $500 a month to parents willing to drive their kids to school, Yahoo! News reports.

Last week, dozens of students at Colorado’s Thunder Ridge High School staged a walkout to protest a mask mandate, where they were joined by Ranch View Middle School students and their parents.

In Pittsburgh, a group of parents in the Penn-Trafford School District held a protest over the mask mandate on Tuesday, where students at Greater Latrobe and Derry Area high schools are staging walkouts.

In Florida, protesters demanding the resignation of a Brevard County School Board member who called an emergency meeting to cast the deciding ballot imposing the school mask mandate, Florida Today reports:

“Tensions over the mask mandate at Brevard Public Schools ran high Wednesday, with protests staged outside schools and outside a School Board member's home. At times the protests have turned ugly, with obscenities shouted and protestors urging students on school property to remove their face coverings.”

“The School Board voted 3-2 to implement a 30-day mask mandate on Monday at an emergency meeting Jenkins called.”

In Oregon, police and firefighters have banded together to sue Democrat Governor Kate Brown and the state for mandating all state workers receive a vaccine, KOIN 6 reports:

“A group of Oregon State Police troopers and Klamath County-based firefighters have filed a lawsuit against Gov. Kate Brown over her mandate requiring full COVID-19 vaccination for state workers.

“The lawsuit, filed in Jefferson County Circuit Court, states the plaintiffs are the Oregon Fraternal Order of Police along with troopers from around the state, including a Major Crimes Sergeant and a state police Captain, and a Kingsley Firefighters Association, which represents all firefighters at Kingsley Field in Klamath County and names the governor and the state of Oregon as defendants.”

After losing nearly three hundred officers due to last year’s Defund the Police movement, the Seattle Police Department looks to lose at least two hundred more police officers who are refusing to abide by the vaccine mandate.

In Chicago, four police unions are working together to protect their members from the vaccine mandate imposed by Democrat Major Lori Lightfoot.

And, in Los Angeles, firefighters have formed Firefighters 4 Freedom to fight back against mandated vaccinations, while hundreds of Los Angeles Police Department officers have joined its subgroup, Roll Call 4 Freedom.

Firefighters 4 Freedom plans to challenge the vaccine mandate in court, based on privacy protections guaranteed in California’s constitution.